Not Your Grandfather’s CAPA: Case For Quality Pilot Gives Corrective And Preventive Action A Facelift

Big changes are afoot when it comes to CAPA. Ten medtech manufacturing sites are playing in a pilot program that uses a novel framework that shifts corrective and preventive action from a one-size-fits-all method to a more nuanced approach that separates higher-risk events from others that don’t need to be elevated to the level of a traditional CAPA. Medtronic quality/regulatory expert Kathryn Merrill weighs in. 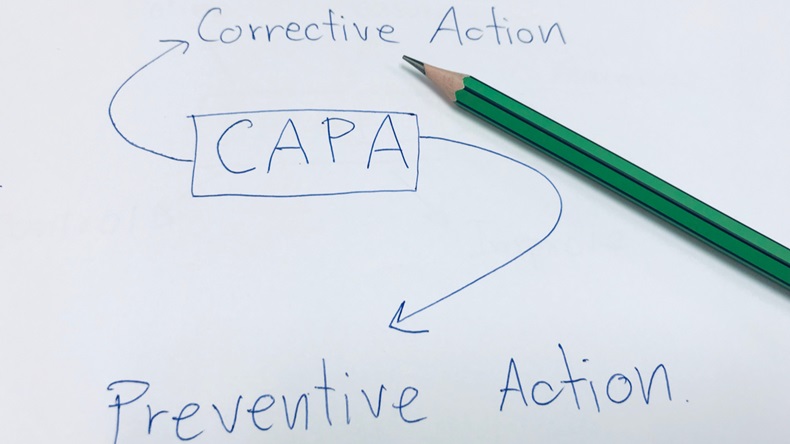 If there’s one acronym that can send chills down the spine of even the most experienced medtech manufacturer, it’s probably “CAPA.”

CAPA routinely leads the pack in citations noted by agency investigators during facility inspections. Thumb through most any device-related FDA warning letter and you’ll probably spot a CAPA violation, from the mundane (not having adequate CAPA procedures) to the more extreme (keeping high-risk CAPAs open for years with no resolution).

But an ongoing pilot program from the Medical Device Innovation Consortium, under the umbrella of the joint FDA/MDIC Case for Quality, might be the antidote to industry’s long-running CAPA woes.

The so-called CAPA Process Improvement Pilot – devised by a Case for Quality team cheekily called “#makeCAPAcool” – shifts corrective and preventive action from a one-size-fits-all method to a more nuanced approach that separates higher-risk events from others that don’t need to be elevated to the level of a traditional CAPA. The goal is to help manufacturers focus on the most important events that could impact product quality and patient experience, rather than dumping every event – regardless of risk or significance – into their CAPA system.

“If a manufacturer wants to try the pilot, we’ll support them.” – Kathryn Merrill

Merrill is chair of #makeCAPAcool, and a quality/regulatory program director at Medtronic PLC.

Meanwhile, other sites that are prepping to be brought into the pilot “are in the process of collecting baseline data and updating their internal procedures to reflect the new CAPA framework,” she said.

#makeCAPAcool is aiming for a minimum of 20 sites to be enrolled in the pilot by spring 2021.

In 2018 the US FDA and the Medical Device Innovation Consortium (MDIC) embarked on a mission to recast corrective and preventive action – CAPA – as a continuous learning tool, rather than a place where problems often go to linger, be ignored and never die. On this week’s podcast we talk about the latest in those efforts, including a pilot...

“If a manufacturer wants to try the pilot, we’ll support them,” Merrill said. “But there is a requirement that any firm enrolled in the pilot also has to designate someone to be part of the #makeCAPAcool team.”

She suggests that “someone at a leadership level with the quality or engineering organization” at the pilot site should be the one designated to join #makeCAPAcool. A site leader should also be selected. (See the list of pilot participant requirements below.)

Being part of #makeCAPAcool takes commitment. The team meets on a biweekly basis to review data from “report-out forms” submitted by participating firms and update the framework with any lessons learned.

Merrill explained: “The pilot sites will report to the #makeCAPAcool team things like, ‘Over the last two weeks, how many issues did you have? What worked well? What should change around the pilot governance or the framework? What was the biggest success? What was a major failure or barrier?’”

Other types of information collected as part of the pilot include baseline and quality event data, the results of quarterly participant surveys, and data culled from mandatory three-month progress checks.

The pilot site meets with three FDA officials during those periodic checks. But Merrill stresses that “there will be no repercussions from this meeting. This allows the FDA and the site to get independent feedback on their risk management processes and how they are implementing the CAPA framework so we can do course corrections, if needed, early on in the pilot, versus at the end. So it’s meant to be a transparent meeting, just between the site and the FDA team members, who are also members of #makeCAPAcool.”

Consulting giant McKinsey & Co., which wrote a whitepaper for the MDIC in December 2019 that outlined the new framework, has been tasked with anonymizing and housing the pilot data.

Merrill said #makeCAPAcool will meet in September to review data the group has collected in aggregate and “make some determinations.”

For example, she said, “we’ll need to decide if we have enough data to go to the FDA and say, ‘Is this something we want to transition to a full-fledged program?’ Do we want to determine how we would roll the program out across industry? And do we have enough data, or do we need to expand it to more sites?”

1. The company must have a manufacturing site that participates in the FDA/MDIC Case for Quality Voluntary Improvement Program. CFQ VIP aims to elevate product, manufacturing and process quality at device firms by appraising the companies against an industry-modified version of the Capability Maturity Model Integration (CMMI) framework.

2. The manufacturer must be in good standing with regulatory bodies.

3. The firm must assign a #makeCAPAcool team representative who will also act as a sponsor for participating sites. The site must also select a leader to implement the pilot.

4. The site must update its CAPA procedures to align with the piloted framework.

5. The site must conduct training on the new processes, collect baseline data, collect quality event data, complete a quarterly survey of roughly 20 questions and participate in a three-month progress check.

How The CAPA Framework Works

The new risk-based CAPA framework is split into two flows:

“If you have a nonconformance that occurs within your quality management system, this Fast-Track CAPA can be treated within the nonconformance process. There’s no need for a separate, standalone CAPA record,” Merrill explained.

She went on: “And you could do that within the audit flow, as well. During an internal audit, if you have an audit finding, you can treat it within the audit system. You still do corrective action, preventive action. But you don’t need a standalone CAPA record.”

The goal of the framework is to enable more issues to be addressed faster, with less burden and cost.

“It’s also intended to engage employees at all levels in problem-solving, versus just a select few that can be trusted with the compliance documentation,” Merrill said. “And the risk-based approach is compliant with today’s regulations. More problems solved will result in safer, better products, faster.”

The framework also gives firms the flexibility to upgrade or downgrade events.

“At any time you can kick [an event] up to a higher level, and we’re actually tracking that within the pilot,” Merrill said. “If someone decides that no CAPA is required, but they do decide to do a Fast-Track anyway, or it’s supposed to go to a Fast-Track and they decide they want to kick it up to an External CAPA, that’s something that we’re keeping track of, because it could be a sign that their risk-assessment process needs to be modified.

“So, we’re capturing that data as a part of the pilot.”

What Makes This New CAPA ‘Cool’?

So what puts the “cool” in #makeCAPAcool’s framework?

“Well, the cool thing about it is, we’re already seeing within the initial pilot sites that they’re able to resolve and close out corrective actions much faster than they were able to do with the traditional CAPA records,” Merrill said. “So, we’re removing the burden from the system and allowing people to focus more on problem-solving and not so much on compliance.

“Now, it’s not that compliance isn’t important, but the new CAPA framework put the focus more on problem-solving than compliance.”

To learn more about the pilot and the #makeCAPAcool framework, contact Merrill at Kathryn.Merrill@medtronic.com.