Phiex Technologies Inc. won the audience vote for the grand prize of $350,000 and MedTech Innovator Award 2022 at the AdvaMed MedTech Conference in Boston, beating out finalists Moon Surgical, Limax Biosciences, LiveMetric and 52 North Health, which received $25,000 each. 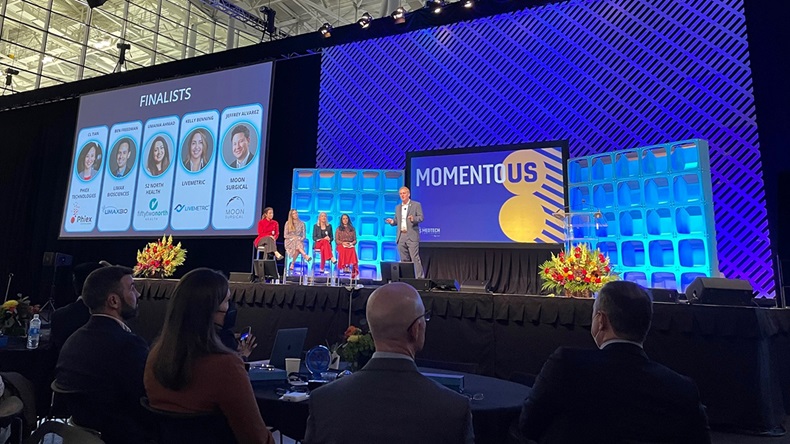 Phiex Technologies, which plans to market a nontoxic sterilization alternative to ethylene oxide (EtO), walked away with a $350,000 check as the 2022 Medtech Innovator Award grand prize winner, beating out four other finalists on the big stage at the AdvaMed Medtech Conference, held from 24-26 October in Boston.

Each year, nonprofit MedTech Innovator, recognizes best-in-class start-ups, a subset of which are selected to participate in the MedTech Innovator Accelerator program, a four-month virtual mentorship-focused program, that culminates in a competition for awards and up to $500,000 in cash prizes. 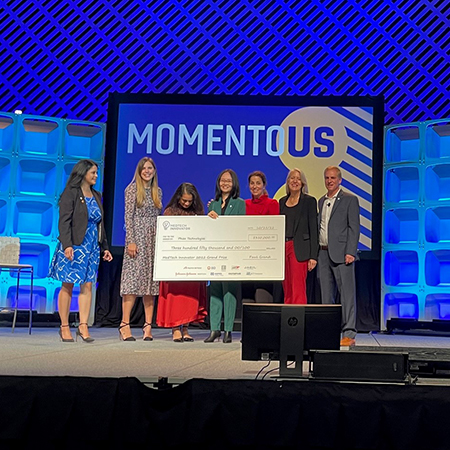 It’s a highly competitive process where industry judges worked alongside Medtech Innovator to evaluate 195 pitches out of more than 1,000 applicants.

This year’s program encompassed 54 companies, 31 early-stage and 23 mid-stage. The companies ranged in their funding stages from seed financing to series C, Paul Grand, CEO of MedTech Innovator told the audience, which had the final vote on 25 October at the AdvaMed event.

“Out of these 54 companies, we have the task of choosing five to be in our finals,” Grand said, calling it an “insanely difficult task because all of these 54 are great companies.” The final five were picked based on mentor feedback.

Below is a roundup of this year’s finalists starting with Phiex Technologies.

Nearly half of the devices sold in the US each year – more than 20 billion in total – are sterilized with EtO, said Jeff Shuren, director of the US Food and Drug Administration’s Center for Devices and Radiological Health (CDRH) in an FDA statement. Several EtO centers had to scale back or cease operations amid concerns that exposure to high levels of EtO could harm communities living near the facilities as well as the environment. There’s also a growing list of more than 700 EtO-related personal injury and medical monitoring claims in courts across the US, Tian noted. This, in turn, has led to a bottleneck in the sterilization supply chain and delayed the release of medical products.  (Also see "Sterilization Facility Shutdowns Could Spell Medical Device Shortage; FDA Urges Firms To Assess 'Downstream Impacts'" - Medtech Insight, 26 Mar, 2019.)

“Our response to this crisis is self-sterilizing by activating materials,” Tian told the audience. Phiex’s technology uses existing common packaging materials, such as plastic film, to sterilize devices.

“Our materials, once exposed to ambient light, releases a high-purity, dry chlorine-dioxide gas,” Tian explained, adding that both the FDA and EPA “like chlorine dioxide gas for its safety and for medical device use.” She added, “Our technology is enabled with a dry precursor technology powder that gets mixed into the film itself. This means you can sterilize where and when you make medical devices.”

Tian said data has shown that Phiex’s technology sterilizes products in as little as an hour, is compatible with a wide range of common materials, including sensitive materials and electronics, and is the only solution that is highly compatible and in-line scalable. Asked about the company’s scale-up and commercialization, Tien said that at the start of 2023, she expects to produce at 1,000 pounds per run and grow that to 10,000 pounds per run by the end of next year.

The company is closing a $4m funding round this quarter, which she said “will get us with multiple products into the market using our technology” with first commercial use expected in 2023.

Limax Biosciences has developed a biodegradable adhesive hydrogel for advanced bleeding with strong and rapid adhesion to wet tissue surfaces. According to Limax CEO Ben Freedman, 30% to 50% of surgeries today are associated with bleeding-related complications, costing the health system between $10,000 and $15,000 per case in hospitalization and prolonged hospital stays.

“Unfortunately, existing sealants and patches aren’t up to the task,” Freedman told the audience. The company’s sealant  [reads as somewhat redundant] adheres to difficult-to-attach surfaces – strong enough to support the weight of a heart – and is stretchy and flexible. The technology is supported by peer-reviewed papers in top scientific journals, Freedman noted.

The internal and hemostasis markets are “ripe for innovation” and expected to grow beyond $9bn, according to Freedman. Among market drivers are the growing aging population and rising numbers of surgical procedures.

Limax has raised $2m in funding, which supported the launch of topical and internal hemostat programs. The company is seeking $6m in seed funding to support first human trials, followed by a $12m series A round to support pivotal clinical trials and commercial launch.

Umaima Ahmad, CEO of 52 North Health, has developed a point-of-care device for cancer patients outside of the hospital to monitor their risk of neutropenic sepsis, a potentially life-threatening complication of chemotherapy.

“There is actually no way of diagnosing it [neutropenic sepsis] outside of the hospital right now,” Ahmad said. This presents a dual problem in that 50% of chemotherapy patients who are rushed into the hospital are not receiving life-saving medication within the one-hour recommended timeline, and the other 50% rushed to the hospital were never at risk for sepsis.

The NeutroCheck device could reduce hospital visits and offer peace of mind to the 650,000 patients who undergo chemotherapy each year and opt to visit the hospital because they are feeling unwell.

“The NutroCheck solution is intended to change this pathway for patients entirely,” she said. It consists of a finger-prick blood test and an AI-driven digital platform that allows patients to measure their risk of sepsis outside the hospital with reliable results within 10 minutes.

The device is based on an adaptation to lateral flow technology and measures neutrophils, a type of white blood cell that helps heal damaged tissues and resolves infection, and a sepsis marker, Ahmad explained. “This would enable doctors to safety triage patients early on in their journey.”

The decision as to whether a patient who feels unwell should seek medical care should remain with the patient’s health care provider, Ahmad noted.

So far, the company has carried out testing on more than 300 clinical samples, showing sensitivity of 99% and specificity of 98%, she said. Clinical validation trials are planned for the first quarter of 2023 in the UK. The trials will evaluate diagnostic accuracy by comparing the test to the gold standard, which is laboratory testing in the hospital.

The Cambridge, UK-based start-up raised £1m in its first round of financing. The round was led by Cambridge Enterprise, the commercialization arm of the University of Cambridge, with participation from Crista Galli Ventures, King’s Health Partners MedTech Innovations, Meltwind, Milltrust Ventures and angel investors.

The watch-like wearable uses a sensor array placed over the radial artery to produce pressure waveforms and is designed to help people with hypertension and cardiovascular disease better manage their disease.

“LiveMetric is highly mobile, and it is always on, so you can see with the ease of wearing this watch, that is all that’s required,” Benning said. “This is really exciting, because you can make real-time decisions about your care – whether it be changes to your lifestyle, behavior or medications – those can be seen and tracked in real time.”

“And we're already studying 20 cardiovascular conditions that we think we can identify through the pressure waveform. So just through the ease of wearing the band, we think we'll be able to screen and find risk for things like biphasic systole or cardiac overload conditions that are normally only found with labs and echocardiograms,” Benning said.

Users will be able to monitor real-time data via an app and also send data to their providers. Benning envisions that patient data could also be sent directly to a health systems’ electronic medical records systems.

The watch is “less than the cost of most consumer wearables on the market, which makes LifeMetric highly scalable,” she noted. The device is reimbursed through remote patient monitoring codes.

“We’re taking the market in pieces that make the most sense to educate it,” she said.

Moon Surgical, based in Paris, France and San Carlos, California, raised $31.3m in series A funding in June to expand its team and to accelerate development of its Maestro robotic surgery system, designed to enhance existing laparoscopy techniques and tools. The financing was led by GT Healthcare Capital & Partners with participation by Johnson & Johnson Innovation – JJDC, Inc., Cathay Health and existing investor, Sofinnova Partners, and medtech leaders.

Jeff Alvarez, chief strategy officer for Moon Surgical, said the system is “small and portable and always available in the operating room” and it “allows surgeons to use their existing tools that they were trained on and use every day.” The robotized surgical assistant is placed at the bedside, opposite the surgeon, and can be easily manipulated by the surgeon.

“We’re focused on the 20 million patients that don’t currently benefit from robotic procedures,” Alvarez said. In April, the system was first used in clinical trials and performed over 27 cases in six indications. “There was no compromise in surgical time and it did not slow the operating room down and there was no surgical assistant.” Alvarez told the audience that that the robotic surgery system performed a wide range of procedures including hernia repairs which showed the “flexibility of the system and the ability to get surgeons interested.”

He pointed to advantages over the da Vinci robot, sold by market leader Intuitive Surgical, Inc., which include flexibility and set-up and procedure time. He noted that the quickest procedure took 26 minutes including robotic set-up time, which is faster than just setting up the da Vinci robot.

Medtech Challenged To Build On 2021 Amid Threats Of Recession: Views From Industry Leaders

Medtech Challenged To Build On 2021 Amid Threats Of Recession: Views From Industry Leaders

US FDA Looks To Balance Device Sterilization With Environmental Concerns