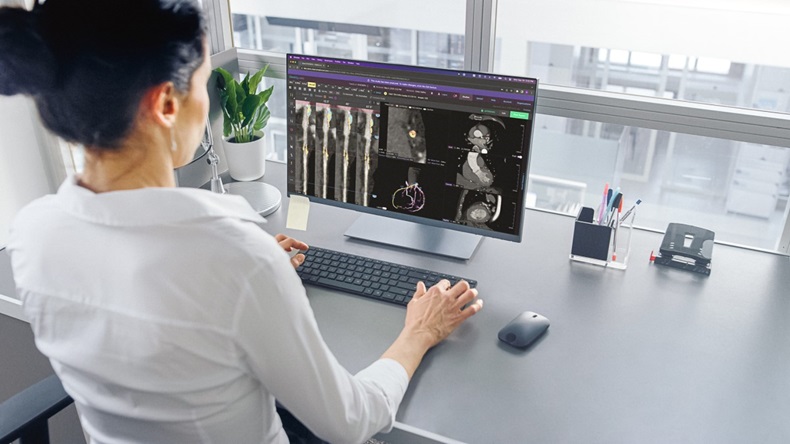 The New York-based company’s CCTA software, cleared by the US Food and Drug Administration in 2020, relies on machine-learning and 3D-imaging techniques to analyze, characterize and quantify coronary disease to help their doctors prevent heart attacks.

The technology is based largely on research by CEO James Min, a former cardiologist at New York-Presbyterian Hospital and professor of radiology at Weill Cornell Medical College in New York. Min founded Cleerly in 2017 to translate the growing body of research on the biology of heart disease into a diagnostic pathway that could improve long-term patient outcomes.

“[As a researcher, I saw] that we were learning all of these things about vascular biology, but when we would try to communicate that to our colleagues, nobody understood it because nobody was following that literature,” Min told Medtech Insight. “[At conferences], we were talking to each other. We were not talking to the public or primary care or general cardiology. We were just talking to ourselves.”

“How do you take all of that advanced phenotypic information stage and promote understanding across the care team – interventional cardiologists, general cardiologists, primary care physicians, advanced practice providers? We [are] trying to solve for that,” he said.

The company is working with the American College of Cardiology to standardize a precision, personalized approach to help individuals reduce their risk of heart attacks while also tracking each patient’s cardiovascular health over time.

“Precision diagnostics [will] democratize care and end up reducing a lot of unnecessary things that we historically have done because we are sort of guessing whether or not the patient's sick or not,” Min said.

The company is also continuing to sponsor clinical research to further demonstrate the value of its system. “Now we have to work with the payers to demonstrate the clinical evidence that we’ve generated and establish fair coverage policies,” Min said.

Despite all the advances in imaging and diagnostics over the last century, about half of all people who suffer a myocardial infarction have no prior symptoms of heart disease; 70% of heart attack victims are considered low risk based on current clinical scoring methods; and 75% of coronary lesions that cause heart attacks are missed by stress tests because they do not significantly narrow the vessel.

“Telling patients ‘We’re going to check your cholesterol and don’t bother to come back until you have chest pain and severe multivessel coronary disease’ is like telling people, ‘Don’t come back until you’ve got metastatic cancer.’” – James Min

Min said moving attention from symptoms to the underlying causes of heart disease represents a major paradigm shift in cardiology.

“What I was taught as a fellow was that it's the symptomatic patients who are at risk and so if you relieve their symptoms, you reduce their risk. But it turns out, that was totally wrong,” he said. “That's because … angina and ischemia are not diseases – they are downstream of the disease. So, we're treating the sequela rather than the primary root cause.”

The results of multiple trials in the last 20 years, including BARI 2D, COURAGE, ISCHEMIA, and REVIVED-BCIS2 have shown that relieving symptoms of heart disease with coronary interventions does not change the patient’s future risk of a heart attack. Instead, the strongest predictor of outcomes with coronary disease is the overall disease burden.

“Telling patients ‘We’re going to check your cholesterol and don’t bother to come back until you have chest pain and severe multivessel coronary disease’ is like telling people, ‘Don’t come back until you’ve got metastatic cancer,’” Min explained.

‘A Solution That Works For Everybody’

Cleerly’s chief technology officer Nick Nieslanik told Medtech Insight, “[Proxy] really gets to the heart of the problem, which is the patient diagnosis and getting the right insights for the physician, so they make a decision.”

“[Proxy] really gets to the heart of the problem, which is the patient diagnosis and getting the right insights for the physician, so they make a decision.” –  Nick Nieslanik

The company is working with hospitals and integrated health care delivery networks to help them integrate Cleerly Proxy into their workflows and facilitates communication between radiologists who interpret diagnostic data and cardiologists who work directly with patients and make treatment recommendations.

“One of the biggest problems with imaging is … there are all these ‘point solutions’ [with] different logins and different surface areas and different credentials and all these other things that people have to remember if they want to access the systems,” Nieslanik said.

“With Proxy, we're trying to eliminate that and drive the insights back right into the tools that they're already using,” he explained. “They don't have to learn a bunch of new stuff just to get to the insight.”

2022 was eventful for Cleerly. In February, it launched Cleerly 2.20, an upgraded version of its software that included user-interface upgrades and additional tools to make it easier for patients and physicians to track their disease metrics over time.

In November, the company announced a partnership with Heartbeat Health, the US’ largest “virtual-first cardiovascular company” that provides a range of telehealth services focused on preventing cardiovascular disease.

Heartbeat Health's co-founder and CEO Jeff Wessler said, "Working with Cleerly, we can improve diagnostic clarity to personalize therapeutic choices that offer both clinical benefit and reduce the risk of a catastrophic cardiac event.”

Most recently, the company announced the appointment of Udo Hoffmann as chief scientific officer. Hoffmann will oversee Cleerly’s large-scale research, including multicenter clinical trials, and help build relationships throughout the health care industry.

Hoffmann was a professor of radiology at Harvard Medical School and the chief of cardiovascular imaging at Massachusetts General Hospital in Boston. He is well-known in cardiology for leading major cardiac diagnostics trials, including REPRIEVE, ROMICAT I, and PROMISE.