Bob White, president of Medtronic’s medical surgical portfolio spoke to Medtech Insight about how the company develops innovative products like the Hugo robot, recent deals that carved out businesses, and the biggest opportunities for future growth and innovation. 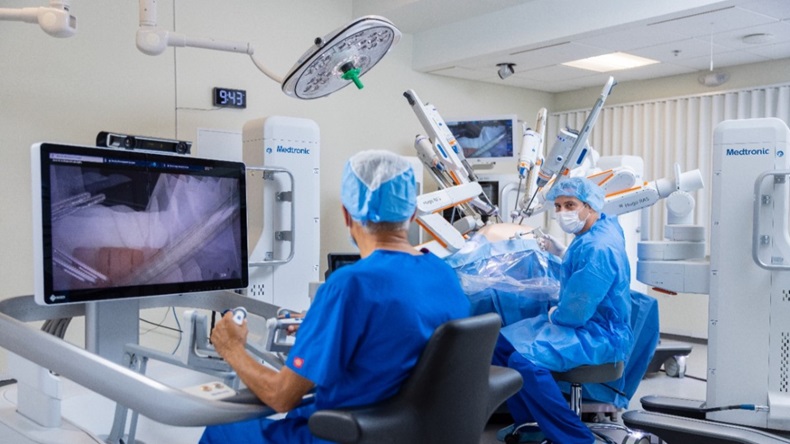 “The intersection between healthcare and technology” is how Bob White, president of Medtronic’s medical surgical portfolio describes his current and previous roles.

Time spent at IBM, GE Healthcare and Covidien, that latter of which merged with Medtronic in a $42.9bn deal in 2014, has granted White an in-depth and broad understanding of the medtech and technology sectors that he now uses when overseeing one-third of Medtronic’s business, roughly $9bn and 30,000 employees.

According to White, managing at such scale requires him to “hire amazing people” to conduct the day-to-day operations, explaining that a large portion of his time is spent instead on focusing on the applications of innovative technologies – ones he argued “many times can cut horizontally, not just vertically.” 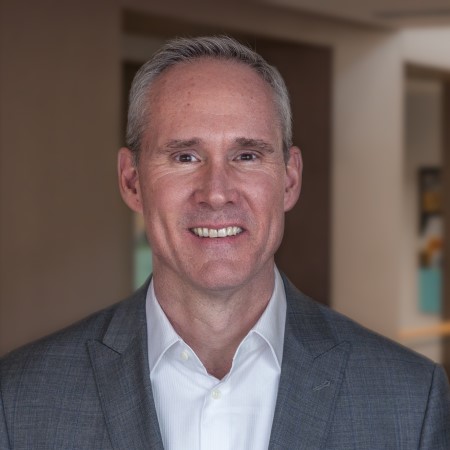 Medtronic's Hugo robotic-assisted surgery system is an example of a product White highlighted that relies on many of these cross-cutting technologies. Although not yet approved in the US, Hugo has been launched throughout Europe – where it is CE marked for gynecological, urological, and general surgery applications – India, Canada, Japan, and some countries in Latin America.

Like other RAS systems, Hugo combines mechatronics, electronics, artificial intelligence, and other disciplines, meaning that right from the start of its development, Medtronic worked hard to ensure that any engineering was done with the end-use in mind.

“It began with collaborations with surgeons. Medtronic has been in the surgical business for sixty years. ... We’ve always prided ourselves in really understanding clinical workflows,” said White.

“You can have the neatest technology, but if it doesn’t fit in with your workflow, you won’t use it. It has to be seamless.” – Bob White

“You can have the neatest technology, but if it doesn’t fit in with your workflow, you won’t use it. It has to be seamless.” To further ensure Hugo fits how surgeons work, Medtronic laid out “four vectors of innovation” at the start of the project.

The first vector included things like the “look and feel of the robot and how it [compares to] the incumbent system.” He said that Medtronic has worked hard to ensure that Hugo is easy-to-use and that it synergizes well with hospital workflows that prioritize cost, adaptability and size.

The second vector is the instrumentation at the end of the robot arms. “This played into a real strength of Medtronic’s,” explained White. “We’ve been in the surgical instrument business for a long, long time.”

As well as developing instrumentation and mechatronics in-house, Medtronic has collaborated with third parties. In May 2020, Medtronic signed a collaborative development agreement with the then-financially troubled Titan Medical, a Canadian company working on its own single port surgical robot.

The deal, which has since prompted further purchase agreements, could be worth up a total of $41m, depending on when developmental milestones are met. (Also see "Single Port, Single Vision: Titan’s New Exec Speaks On Reshaping Robotics Strategy" - Medtech Insight, 8 Sep, 2022.)

Visualization and navigation vastly improved usability of surgical robots in general, while also improving patient safety, White said. “If you think about surgical robotics, it’s all about giving surgeons better hands and better eyes. We can create no-cut zones around specific structures and anatomy and highlight these – it's been a fantastic journey and [there is] future potential.”

Data is the fourth vector. “Digital surgery is providing video to make insight from data available,” said White. “Thousands of surgeries are performed each year [using robots]. In the near future, all these surgeries will inform expert knowledge and insight into the hands of a surgeon at the time of the procedure – this is the future.”

Hugo was publicly revealed in 2019, but Medtronic first began toying with the idea of building a surgical robot more than a decade ago.

This decade-long development cycle has coincided with rapid development of software using artificial intelligence and machine learning, which has gone on to transform almost every industry.

For companies like Medtronic that are working on integrating software and hardware, this has raised the challenge of developing hardware that is adaptable enough to work through cycles of increasingly complex and capable software.

“As AI changes and evolves, our instruments have the ability to respond because so much about them is driven by software. We can upgrade them with different sensors,” he said. “Medtronic has been really involved in making sure our software architecture is nimble and agile enough to adapt."

“AI has driven the real-time feedback we can give to surgeons through advanced surgical instrumentation. They can sense the thickness of tissue and therefore the pressure and staple length needed.”

The rapid development of software applied to surgery is another example of “personalized medicine.” Once confined to the pharmaceutical sector where patient-by-patient therapies and dosages could be metered out, the promise of custom treatments has expanded into medtech.

White explained that by connecting all the data streams from a variety of Medtronic devices “from pre-planning to surgical intervention,” the hospital can become an “ecosystem.”

“We’re seeing glimpses of this today,” he said. “Think about patients – most have comorbidities... [connected systems] and AI allow you to drive insights earlier and better so therefore you can impact treatment protocols.”

“Putting people at the center of health care technology is so important to Medtronic. It’s not technology for technology’s sake – it's patient-centric, personalized, and done not just for the episode, but for the continuum.”

An example he highlighted was Medtronic’s GI Genius intelligent endoscopy module– an AI-powered tool to help clinicians detect colorectal polyps of varying shapes and sizes automatically in real time, which in turn can reduce the risk of colorectal cancer. “It can scan thousands of images during a colonoscopy, which it uses to alert physicians of hard-to-spot potentially precancerous lesions,” said White.

“Even the best GI docs find it helpful,” he pointed out. “We don’t replace them, we help them. The impact GI Genius can have – colorectal cancer is the second deadliest cancer in the US with men and women combined – it really has opened the door. [It is] technology that sits well in a workflow that makes both clinicians’ and patients’ lives easier.”

Slimming Down To Fatten Up

Within the next 12 to 18 months, White’s domain at Medtronic will shrink by roughly $2bn after the company carves out its patient monitoring, including Medtronic’s Care Management Services (MCMS), and Respiratory Interventions businesses. The company announced the divestiture on 24 October. (Also see "Medtronic Cuts Away More: Spins Off Patient Monitoring And Respiratory Business" - Medtech Insight, 25 Oct, 2022.)

It is a continuation Medtronic's ongoing scrutiny of its own portfolio. (Also see "Medtronic Reviews Its Portfolio, Driving Speculation It May Sell Diabetes Unit" - Medtech Insight, 24 Feb, 2022.)

The two companies will be merged into one, “NewCo,” and at the time of the announcement, Medtronic CEO Geoff Martha said that the move will give NewCo “potential for growth acceleration with increased investment and dedicated capital allocation.”

White agreed. “[NewCo] will attract more investment externally than we could provide internally,” he stated. “The situation at Medtronic is a blessing – we have so many businesses to invest in, we have to make choices.”

"The situation at Medtronic is a blessing – we have so many businesses to invest in, we have to make choices.” – Bob White

He argued that the extra funding that should become available will “be good for the employees but also great for customers and their patients who rely on these technologies,” and that that in the 12-18 months the separation is expected to take, the currently tough investment markets will change.

White was also keen to highlight that Medtronic is not carving out businesses it sees as lacking potential. He pointed out the company’s renal care division, which announced in May its intent to create a joint venture with dialysis and kidney care giant, DaVita.  (Also see "Medtronic Starts Planned Portfolio Simplification With DaVita Renal Care Spin Off" - Medtech Insight, 27 May, 2022.)

“Kidney care moving from the center to the home will be transformative,” he argued. “Inside of Medtronic we said, ‘we could continue to develop this, or get a partner in that specific space who will help us grow that business bigger and faster’ so we did it as a joint venture – we're open to different constructs.”

He compared this earlier deal with the more recent. “We think there are some real breakthrough technologies that could happen in the patient monitoring space too.”

“We don’t spin things out that we think won’t be transformative,” he explained. “We expect these businesses will have transformative technologies but have a better likelihood of succeeding as a standalone focused company.”

When asked how mergers and acquisition strategies differ at the scale of giants, White did not comment on J&J’s dealings, but instead explained that, at Medtronic, the teams there “look at our core competencies and where we can differentiate ourselves. If we can fund it, we keep a business inside. If we don’t think we can fund it adequately, we’ll put it outside.”

This, he said is the “beauty of medtech. There are all these strategies ... it is an industry of permutations.”

Medtronic will continue to acquire companies even as its spinning off others, White said. “We’re always looking at both organic programs inside Medtronic and inorganic opportunities that can increase our growth and deliver value for shareholders – you should expect us to continue to be acquisitive.”

“There are so many great technology innovations that matter to patients," he said. "Two people every second benefit from some Medtronic therapy – that is both a humbling statistic and one we take with great responsibility to know that our focus on quality, reliability and patient safety is at the forefront of what we do.”