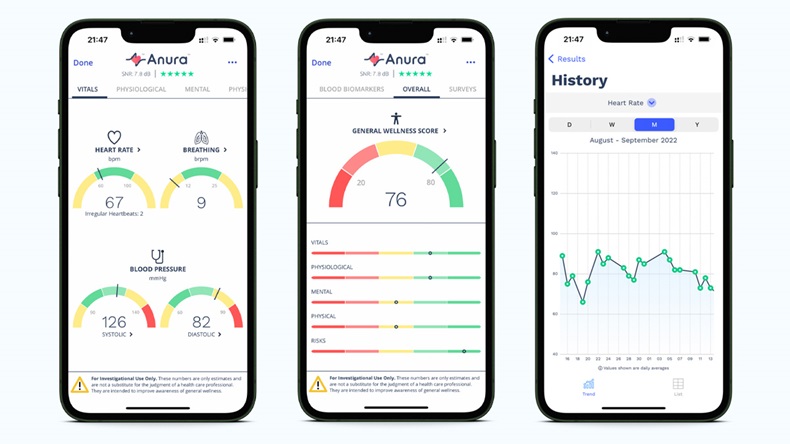 Toronto-based NuraLogix Corp. will demo its machine-learning models that can predict an individual’s risk for pre-diabetes with a simple 30-second video selfie using a smartphone at the HLTH conference in Las Vegas.

The fifth annual mega health tech conference, which takes place from 13-16 January, is expected to draw more than 9,500 attendees to the Venetian Expo.

NuraLogix’s machine learning models were trained by researchers using facial blood flow patterns of patients who had recently undergone a blood test for fasting glucose and HbA1C (glycated haemoglobin) levels, or the amount of sugar in blood, to predict a person’s risk for pre-diabetes.

“What is important about this research is we have demonstrated that we can use the technology most people already have access to – their smartphone – to obtain the early indications of diabetic risk,” said primary care physician and NuraLogix’s chief medical officer Keith Thompson.

Both cases showed that the models’ predictions had an AUC, an index of whole glucose excursion after glucose loading, greater than 0.80 compared with the classic Framingham Risk Score for quantifying the risk of coronary heart disease in non-diabetic patients aged 30-79 with no history of CHD, which ranges from 72-76%.

“We’re not trying to compete with a medical lab test,” Thompson explained. “We have developed this as a classifier model.”

Thompson noted that 90% of people who have pre-diabetes are unaware of the condition and 70% go on to develop diabetes. He hopes that NuraLogix’s technology will eventually become a tool for population screening and “perhaps even monitoring of patients with diabetes.”

NuraLogix’s investigational technology uses a novel imaging method called transdermal optical imaging (TOI) to detect and track key regions of interest in the face. TOI extracts the information and then sends it to the cloud for signal processing to measure vital signs like breathing rate and heart rate and assess a person’s risk for pre-diabetes, hypertension, high cholesterol and fatty liver.

The machine-learning models have been trained on patients with “simple conditions,” such as high cholesterol and hypertension, to predict risk factors for disease. “We don’t know how the models would perform with patients [who have complex medical conditions],” Thompson said.

Thompson said that the company’s “foundational stuff” was to measure vital signs and then build upon that. Under its software-as-a-service B2B or B2B2C business model, NuraLogix is already “crossing many markets” with its health wellness offerings, Thompson said.

Currently the company markets the general health and wellness features of its Anura app, which combines data gathered through its TOI technology from more than 40,000 patients with multiple conditions, to customers including Tokyo-based IT service company NTT Data, health insurance companies Bupa Group and AIA, and financial services company HSBC. These companies use NuraLogix’s technology to assess things such as members’ health and wellness in the case of insurance companies or develop wellness programs for companies.

“Whether that population is a government-sponsored-funded program and trying to figure out multiple risks within a region or is a private payer, and that’s the insurance company or employer trying to offer the best health benefits or understand what wellness programs they should develop for their subscribers or employees, it would be that SaaS-type of model,” he said.

The company’s move into medical-grade areas for its algorithms, such as measuring blood pressure and screening for HbA1c, however, will require regulatory clearance by the US Food and Drug Administration.

Thompson said that NuraLogix plans to pursue the de novo pathway with the FDA for using its technology for its flagship module, contactless blood pressure measuring. That will be followed by additional requests for regulatory clearances for its diabetes and blood pressure modules.

The company has entered into an initial agreement with an unnamed government in Asia to screen a region of 10 million people for cardiovascular disease using its app.

“Population health, really, is I think where we’re headed,” he said, adding “the resources required in those traditional methods to be able to reach multiple people or reach larger populations that’s not really feasible using a traditional lab test or physician visits,” he explained.

“There’s value in terms of health equity," he said. Studies have shown that even in the poorest nations, cell phones are ubiquitous.

“We think that the cell phone is going to be that personal health agent in the future," he added.