Edwards Lifesciences is ramping up US commercialization of its Pascal Precision mitral valve transcatheter edge-to-edge repair device, the first US competitor for Abbott’s MitraClip. The FDA approved Pascal Precision earlier than the company expected, based on results of the CLASP IID trial. 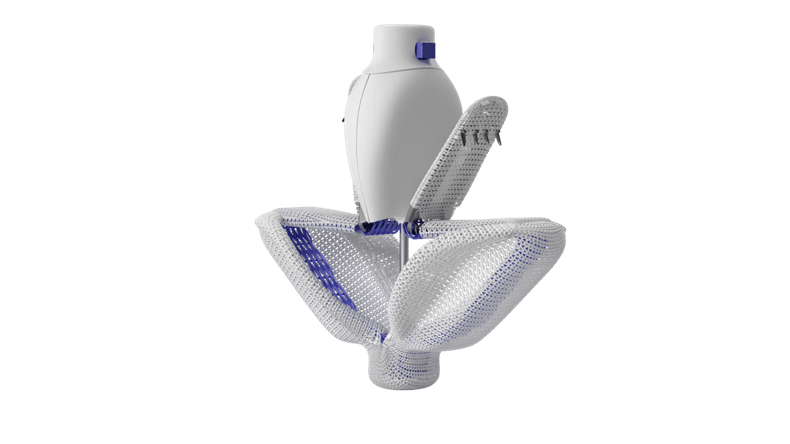 Edwards Lifesciences is preparing to launch its Pascal Precision mitral valve transcatheter edge-to-edge repair (M-TEER) system in the US where it will be the first direct competitor for Abbott’s MitraClip.

Pascal will compete with Abbott’s MitraClip, which has been available in Europe since 2008 and in the US since 2013. Until the FDA approved Pascal, MitraClip was the only M-TEER device available in the US.

At Edwards’ satellite event during the TCT meeting in Boston, Edwards CEO Michael Mussallem said the company is still building the sales and marketing team to support the launch of Pascal Precision.

“This approval clearly came earlier than we thought [it would],” he said. “We're ready – we have the supply, we certainly have the will and the desire to do it – this is going to be more of a gradual ramp given the early timing.”

The FDA approved Pascal for treating degenerative MR based on data from the CLASP IID pivotal trial, which compared Edwards’ Pascal to Abbott’s MitraClip. It is the first randomized controlled trial to directly compare two contemporary M-TEER therapies. (See Sidebar).

“Pascal is a premium, superior technology. And so, our intention is to have a modest premium versus what's available in the marketplace today.” – Michael Mussallem

Interim results from CLASP IID, including data from the non-randomized CLASP IID registry of patients with complex anatomy, were presented at the Transcatheter Cardiovascular Therapeutics (TCT) meeting in Boston on 17 September.

Mussallem said that he believes the CLASP IID data suggest that Pascal is superior to MitraClip and could be priced higher than MitraClip.

“Pascal is a premium, superior technology. And so, our intention is to have a modest premium versus what's available in the marketplace today.”

Pascal Ace is narrower than the Pascal Edwards Lifesciences

Wall Street analysts expect the CLASP IID results will give Edwards a running start into the US M-TEER market and help the M-TEER market overall. Abbott makes more than $400m in the US from MitraClip each year, but less than 10% of patients who could benefit from M-TEER are getting the therapy so there is plenty of room for new competitors, according to William Blair analyst Margaret Kaczor.

“With now multiple studies supporting treatment, penetration in the single-digit range, and thousands of patients being treated successfully, we believe this latest data set should lead to broader treatment of mitral valve disease with TEER,” she wrote in a 19 September note. “As the second market entrant, Edwards enters an attractive market with a differentiated device that will prove to be compelling to clinicians and patients.”

But Kaczor expects Pascal will be “another meaningful growth driver for Edwards over the next five-plus years.” Pascal sales in Europe have already been growing rapidly despite continued COVID-related challenges and Kaczor expects the CLASP IID data will “accelerate and expand” demand for the system.

Now That There Is Choice, Which M-TEER Device Should You Chose?

Although both Pascal and MitraClip use the edge-to-edge approach to clip the valve leaflets together, they each have different features that offer advantages in certain types of patient anatomy.

For example, Pascal has a central spacer to bridge the coaptation gap and can elongate to navigate through the dense chordae connected to the mitral valve.

Both Pascal and MitraClip G4 – the current version of MitraClip – allow the operator to grasp the separate leaflets of the valve independently, but the CLASP IID investigators suggested MitraClip’s mechanism may be easier to use in patients with highly calcified leaflets.

“Since the Pascal device is hollow nitinol and can flex, even though it is about twice the size of the MitraClip, the data we have show it can go into smaller mitral valve annuli … the Pascal device doesn't obstruct the inflow as much due to its flexibility,” lead investigator Scott Lim, from the University of Virginia, explained during a press conference at the TCT meeting.

However, “the mechanical closure of a MitraClip is definitely much stronger,” Lim said. “So, if you're going after a valve that has calcium in the leaflet tips or really thick leaflets that you need to crush together, the MitraClip could help with that.”

"There are going to be features [of patients] that make them better candidates for one [device] or the other. I don’t think we have all the answers now.” – Federico Asch

Commenting on the results at the TCT meeting, Federico Asch, an echocardiographer and cardiologist at Georgetown University in Washington, DC, said that the availability of different M-TEER devices will eventually help patients.

“We are coming to a moment where we actually have options and [this new data] builds on the data we have on MitraClip, not just as a device, but as a concept and shows that TEER works,” he said. “There are going to be features [of patients] that make them better candidates for one [device] or the other. I don’t think we have all the answers now, but these are data we will be building on.”

Abbott will have a clear marketing advantage over Edwards – at least temporarily – not only because it is already well-established in the market, but also because MitraClip has a broader FDA-approved indication than Pascal.

Pascal is FDA-approved to treat degenerative (primary) MR, which is caused by disease in the valve itself. However, it is not indicated to treat functional (secondary) MR caused by dysfunction of the left ventricle. (Also see "Functional MR Added To FDA-Approved Indication For Abbott's MitraClip " - Medtech Insight, 14 Mar, 2019.)

The FDA approved MitraClip to treat degenerative MR in 2013 and expanded its indication to include functional MR population in 2019. The expansion was based on results from the COAPT trial. Both indications are covered by a national Medicare coverage policy. (Also see "CMS Extends National Medicare Coverage For Transcatheter Mitral Valve Repair" - Medtech Insight, 20 Jan, 2021.)

“We are only going to promote this clearly for our label, which is degenerative patients only – not functional patients, not ‘mixed’ patients,” Mussallem said.

Edwards is currently sponsoring the CLASP IIF trial to demonstrate the safety and efficacy of Pascal Precision in patients with functional MR and earn FDA approval for that indication.

Ted Feldman, the VP of medical affairs for Edwards’ transcatheter mitral and tricuspid therapies business, said “now that we have completed IID and have commercialization, the emphasis on IIF is going to be really greatly ramped up. So, we just have to keep working on the enrollment.”

"As the second market entrant, Edwards enters an attractive market with a differentiated device that will prove to be compelling to clinicians and patients.” – Margaret Kaczor

Earning the functional MR indication is critical to the overall success of Edward’s mitral repair business because it represents many more patients than degenerative MR.

“What is uncertain is that there is a group of mixed etiology where they truly have features of both pathologies,” he said. “That is something we'll understand better as we gain commercial experience.”

Meanwhile, Abbott is pressing its labeling advantage by sponsoring ongoing studies of MitraClip in patients with functional MR.

New data from 1,044 patients in the EXPAND G4 post-market study of MitraClip G4 showed a 30-day mortality rate was 1.3% – the lowest reported in an M-TEER study so far – and 91% of patients had mild or zero MR at 30 days. The study also showed significant improvements in heart failure symptoms and quality of life scores.

Ralph Stephan von Bardeleben from the University Medical Center of Mainz in Germany, and Jason Rogers of the University of California, Davis, presented the results at the TCT meeting on 18 September.

Edwards’ CSO: Acquisitions Are Not The Only Way To Drive A Medtech Growth Strategy