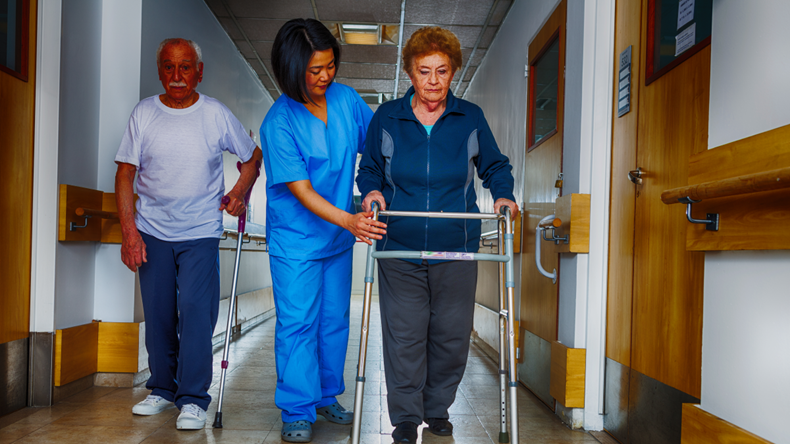 As the global population ages, a crop of tech startups is rising to meet seniors’ needs and improve quality of life, including by keeping them upright and mobile.

AI-enabled technologies that can detect changes in a person’s gait to serve as an early warning system for potential health problems, or assist with mobility issues, in the case of Parkinson’s disease patients for example, are expected to see rising demand.

The world’s aging, increasingly tech-savvy population has created demand for device and digital health solutions that enable people to live longer, healthier, more independent lives. In this first article of a three-part series on Agetech, we highlight innovative telehealth companies that are making impacts by going beyond primary clinical needs to address mental health, quality of life, and underserved patients.

So are innovations to help reduce risk of falling. According to the Centers for Disease Control and Prevention, millions of people aged 65 and older suffer falls each year, with one in five falls resulting in serious injury – eg, head injuries or hip fractures. This leads to $50bn in medical costs, with Medicare and Medicaid footing 75% of the bill.

Denver, Colorado-based start-up Nymbl Science, which developed an app-based program that gamifies balance and fall prevention, partners with insurers, such as Medicare Advantage and single payer systems, to provide training exercises at home via any smart device.

“One in three adults falls every year, but only one in 800 [older adults] finds themselves in a balance class,” Nathan Estrada, clinical vice president of Nymbl Science, told Medtech Insight. Nymbl has found that most older adults don’t want to leave the house for balance training and don’t want to be told “what they should do,” which led the firm to develop an engaging solution for use at home. 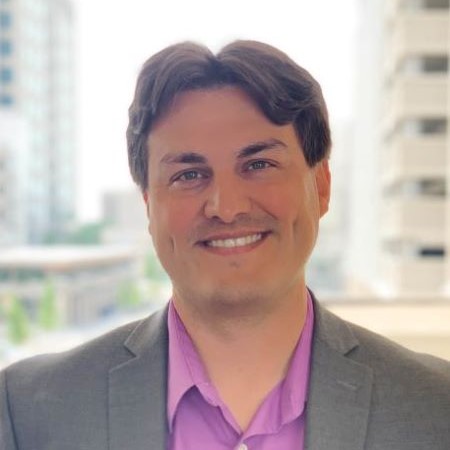 The app-based balance program trains the brain and body to work together, known as dual-tasking, sharpening the balance sensation and the balance reflex “so that next time someone stumbles, instead of falling, they step, and they catch themselves,” Estrada explained.

“[Dual-task balance training] is a clinical gold standard in physical therapy and speech therapy and occupational therapy … We were just able to deploy it in a way that any older adult could do it in the privacy of their own home, on their own smart device,” he said.

App users start off by entering personal information and creating a password, followed by a questionnaire to identify a person’s fall risk, which is used to customize the user’s program as well as to help the client understand the population’s overall risk, Nymbl said. A full training session using the app takes about 10 minutes and comprises multiple exercises, each lasting 30-90 seconds, including a cognitive challenge.

“By risk-assessing people, we can get them started at the right spot and we progress them based on performance,” Estrada said. Nymbl is available to about 500,000 people and has 60,000 users, the average being 72 years old. He noted that while average engagement with a digital health tool on Medicare Advantage Plans is only 2%, one-third of all Medicare Advantage Plus members engage with the Nymbl platform. The company claims that using the app has shown to improve balance by 30%.

A 12-month fall prevention study involving 15,000 participants found that older adults who performed 12 training sessions a week using the Nymbl app had a higher reduction rate in insurance claims for falls (35%) than people who performed four balance training sessions a week (28% reduction in claims). The study was conducted in New Zealand where the app is also available, outside the US.

In July 2021, Nymbl announced it expanded its partnership with the Denver Regional Council of Governments (DRCOG) to enroll more Coloradans after reaching its goal of providing the balance program for free to 5,000 Coloradans ages 60 and above. Last October, it inked partnerships with Blue Cross and Blue Shield of Kansas City to serve the Medicare Advantage population of Blue KC’s older adult members.

By year-end, Nymbl also plans to add a pelvic floor training program to help people better manage urinary urgency, a problem that can provoke a lot of anxiety and prevent older people from participating in social activities outside the home. The company also intends to further “personalize” its content to help users meet their unique goals.

“What we found is an older adult, once their balance is good, they come back to us and go, ‘Nymbl what’s next?’ It’s a great pleasure because then you can say, ‘Ok, well, let’s start working on getting you moving again and expanding your participation in life’ … You have to guide them and be a good partner with them and slowly bring them back to the participation and function that they want to do in their life now that they are no longer impaired by bad balance,” he said.

The “Tesla” Of Walkers

Jay Goss, general partner at venture capital firm Wavemaker Three-Sixty Health, calls it the “Tesla of walkers,” but for Camino Robotics CEO Duncan Orrell-Jones, the idea of engineering a smart walker that integrates cameras, sensors and artificial intelligence to help prevent older people from falling, and reduce their fear of falling, is personal. 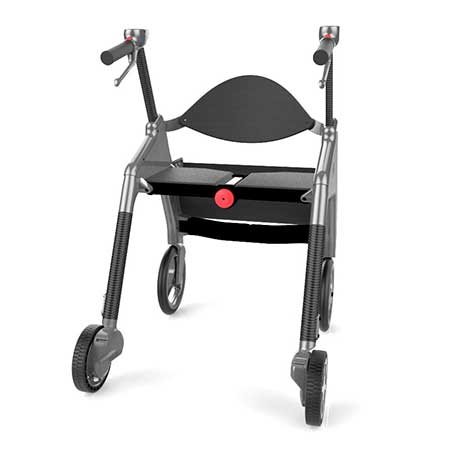 Orrell-Jones’ motivation to build a smart walker came from watching his late father, who lived with Parkinson’s disease for nearly 25 years and faced many challenges in operating a traditional walker in his battle to stay mobile.

Founded in 2019 at Idealab, a Pasadena, CA-based incubator for tech companies, Camino Robotics is still in its early stages of development.

But Orrell-Jones said the company has already tested and refined the device with more than 1,000 users, family members and physical therapists and is moving into beta testing in the coming weeks. The company hopes to commercialize the smart walker next fall, pending US regulatory clearance, which according to the CEO, is likely going to be a 510(k) submission.

“Health depends on continuing to move around. It’s not falling that hurts a lot of our seniors – it’s the fear of falling. If they have something where they don’t have a stigma .. they are [likely] to walk more often.” – Jay Goss

What makes the Camino “smart” are several technical features – cameras, sensors, as well as AI-driven software that tracks gait analytics such as body positioning, number of steps taken, step length and height, and swing time, allowing caregivers, family members and end-users to monitor and assess gait trends and stability metrics over time. This data will be made available on an accompanying app.

On the technical side, the battery-powered walker has “smart-power wheels” that automatically provide just the right amount of boost to make the device easy to use uphill, the optimal amount of braking to prevent the walker from accelerating downhill, and a parking brake that activates when the user’s hands are off the grips, Orrell-Jones explained.

It also has compact folding to make it easier to transport and a “narrow mode” to enable the user to navigate through smaller spaces or walkways. The walker will eventually also be able to detect obstacles, such as curbs or poles, and help the user avoid them by slowing down or breaking for instance. Orrell-Jones likens this last feature to “lane detection” in cars.

“We think ultimately we start with keeping people moving, behavioral nudges, making the device easy to live with, easy to use, easy to walk with, and then having analytics around gait,” he said. This will not only provide critical insights for care providers, physical therapists, but will also connect the user to the community.”

While the business model has not yet been fully fleshed out, Orrell-Jones said it’s likely going to be similar to Peloton’s where users are charged a monthly subscription fee, which could be between $35 and$70 for the “base model” and then pay extra for add-on-services.

“There’s lots of things we can do,” he said. Examples of add-ons include detecting if the device has done something unusual or is located in an area where the user normally doesn’t go. Orrell-Jones said eventually the smart walker may be equipped with geofencing to define geographical boundaries.

“Various things like that that can be unlocked by the fact that we have intelligence in the device for the types of services we can add later on,” he said.

“Various things like that that can be unlocked by the fact that we have intelligence in the device for the types of services, we can add later on.” – Duncan Orrell-Jones

VC Goss says the sleek design and built-in-technology of the Camino Robotics walker not only sets it apart from traditional clunky walkers, but its design approach destigmatizes walker use, which in turn will entice older people to leave the house more often.

Wavemaker Three Sixty Health is one of six VCs that have invested in the company. Others are Ubiquity Ventures, Idealabx, Prescursor Ventures and Ocgrow Ventures. To date, Camino Robotics has raised $5m in VC funding, according to Orrell-Jones.

“Health depends on continuing to move around,” Goss said. “It’s not falling that hurts a lot of our seniors – it’s the fear of falling. If they have something where they don’t have a stigma … they are [likely] to walk more often.”

Orrell-Jones can attest to that. He told Medtech Insight that his mother was “fit as a fiddle” until she had two bad falls, after which she had such fear of walking that she became sedentary. She passed away 18 months after her second fall, which Orrell-Jones attributes in part to her not being active, which research has shown is key to aging well.