Manufacturers of devices and apps focused on reproductive health are still feeling out the import of a recent US Supreme Court decision overturning the federal right to abortion. Some attorneys say the ramifications may be vast. 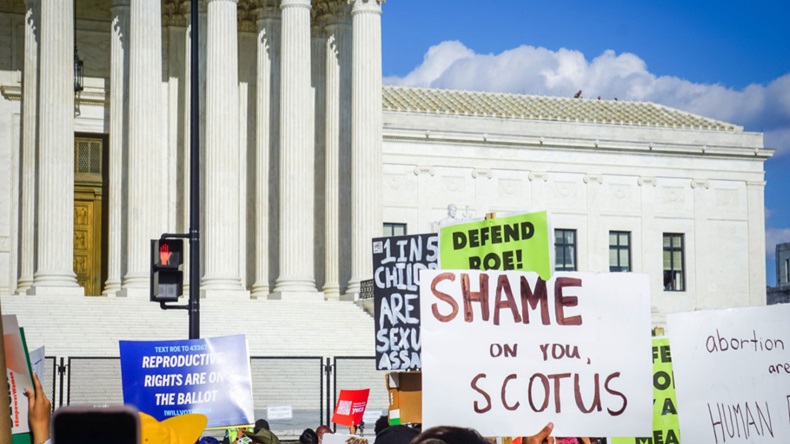 Source: Shutterstock Pro-choice protestors gather in front of the US Supreme Court in Washington, DC, on 24 June.

The US Supreme Court’s ruling in Dobbs v. Jackson Women's Health Organization last week, which overturned abortion-rights bedrock case Roe v. Wade, left many stakeholders asking what comes next. That’s true of women, of health care providers, of lawmakers – and of medical technology companies whose devices may be pulled into the fray.

“There’s a couple of implications here,” said Bethany Corbin, an attorney with Nixon Gwilt Law who specializes in technology related to women’s health, or “femtech.” “The majority opinion expressly stated that it was limiting this overturning of privacy rights to abortion. But it [also] said the right to privacy wasn’t a foundational concept in the Constitution, which isn’t only Roe v. Wade, but also contraception case Griswold v. Connecticut.”

And if Griswold is overturned, that could reduce the availability of some birth control methods in certain states. Justice Clarence Thomas said in a concurring opinion that he would like to revisit the 1965 case, as well as more recent decisions protecting same-sex relationships.

“Part of what the opinion leaves undecided is how wide and how broad the category of abortion and termination of pregnancy that states can reach under the Dobbs principle may be,” he said. For example, the majority opinion makes a point of saying the verdict doesn’t affect the right to access contraceptives. But, Wolff noted, part of the debate playing out in some states is over whether certain forms of contraception should be understood as abortifacients.

For example, intrauterine devices (IUDs) may prevent a fertilized egg from implanting in the uterus, so a state law that defines life as beginning at conception could block the use of IUDs. And in the 2014 Supreme Court case Burwell v. Hobby Lobby, the court found that privately held corporations could refuse to cover forms of contraception to which the owners had moral objections. While the specific issues addressed by that verdict were different from those at stake in Dobbs, Wolff believes that the Hobby Lobby decision could open the door to a broader definition of “abortifacient” at the federal level.

“In Hobby Lobby, part of what the court said was that we're not going to second-guess the views of these religious believers that these forms of contraception constitute abortifacients,” he explained. “That's a different context, but it is a recent opinion – also by Justice Alito, as it happens – in which the Court said [it was] going to defer to people who take the view that certain forms of contraception are the moral equivalent of abortion. And that is very concerning.”

The Dobbs decision could allow states to make new laws regulating medical abortion performed with pills prescribed via telemedicine, as well as “brick and mortar” abortion clinics. Additionally, Corbin noted, many women are now wary of using femtech apps such as fertility trackers due to concerns their data may not be secure and could lead to law enforcement being aware of an abortion or lost pregnancy.

"If women aren't trusting the very products and devices that are supposed to bring their health care into the modern times – and women have often been left out of modern medicine – then [this decision] is going to stifle innovation.” – Bethany Corbin

“The femtech industry is really going to be the basis for evolution and revolutionization of women's health care,” Corbin said. “And so if women aren't trusting the very products and devices that are supposed to bring their health care into the modern times – and women have often been left out of modern medicine – then [this decision] is going to stifle innovation.”

To combat that possibility, Corbin recommends apps and devices in the reproductive health arena be designed with privacy and security as foundational principles to ensure consumer data isn’t placed at risk. While this is easier for a product under development than for one already on the market, there are still options for existing products, she said.

“One of the first things that I encourage companies to do is to really build out a data map and try to figure out exactly where your data is flowing, how and where it can be accessed, how it's entering the system, and where it is being stored, to really understand all of the points in which there could be weaknesses for privacy and security,” she said. “And then taking that in to determine, are you only collecting the minimum necessary data for your app or your device to function?”

Many apps, Corbin said, collect much more data than they need, so the developer can sell the data for profit. And that’s an issue because law enforcement agencies may buy the data off the open market, circumventing any need for a warrant. Companies in the space are making changes to avoid this, including strengthening privacy policies and allowing consumers to use the app anonymously, she said.

Developer Voices Can Be ‘Powerful’

The best thing manufacturers of reproductive health products such as IUDs can do at this point is to act  as advocates, Corbin said.

“Hearing a voice from medical device manufacturers would be very powerful, showing that they're supporting women,” she said. “And it has a business effect too.” For example, women trying to choose a form of birth control might opt for a product made by a company that’s come forward in favor of reproductive rights.

Corbin further recommended that device makers track legal developments in the space. As advocates, they can submit amicus curae briefs in lawsuits challenging birth control availability – something that the lawyers said might be a powerful tool.

“Historically, the Supreme Court has cared a lot about the interests of the business community,” Wolff explained. “And it has often mattered to the court, when, for example, the US Chamber of Commerce, or big, powerful corporate and commercial trade associations will weigh in … saying, ‘Look, if you do something radically different from what we've done before, here are the ways in which that's going to affect our industry.’”

And in terms of their own operations, being aware of changing laws could help protect a company from coming under fire.

“A lot of these companies operate in all 50 states, and so these laws are very much in flux. They're changing day by day,” Corbin said. “And so making sure that they have somebody who is tracking how these regulations are impacting their products … is going to be essential, because some of these states have laws that will prohibit aiding and abetting for getting an abortion.” That might be expanded to include IUDs or emergency contraception – potentially opening the door to legal liability, she said.

“One thing I think we'll see in the next few months, is a lot of legal guidance more specific to products and services in general,” he said.  “There's going to be just kind of an array of things to consider, from what products can be sold, how they can be sold, and then what jurisdictions they can be sold in. So definitely, if [manufacturers] are not part of a trade association or they don't have access to legal counsel, they're definitely going to want to figure out some way to get guidance specific to their devices or services.”

Manufacturer: ‘Keep Up The Fight’

But despite the ongoing legal challenges, some device manufacturers are developing new reproductive health products. One such company, Femasys, has two treatments in clinical trials: permanent sterilization technique FemBloc, which delivers a polymer to the fallopian tubes to encourage them to scar and become blocked by tissue, and fertility treatment FemSeed, which delivers sperm to the fallopian tubes to help with conception.

Femasys president and CEO Kathy Lee-Sepsick, who developed the devices, says that she was inspired to enter the field of women’s health by the announcement of safety issues tied to the Essure contraceptive device.

“We just need more options in these categories,” she remembers thinking. “We need options for women making these choices. So that was kind of the birth of FemBloc.”

“Keep up the fight, because we need more people inventing for women, because … in the categories we're working on, we're talking there's nothing that’s been invented for decades.” – Kathy Lee-Sepsick

While Femasys’s products aren’t directly threatened by the Dobbs decision, she says it has increased the attention paid to women’s health all around – including awareness of a general lack of choices. More women, she says, are looking for permanent birth control. Additionally, FemSeed allows fertility treatment without the creation of embryos outside the body. That means it wouldn’t be affected by laws defining life as beginning at conception, which some observers believe could ban in vitro fertilization.

Still, Lee-Sepsick notes that women’s health can be a difficult area to pursue. Investors can be hard to come by, for one thing. But she believes it’s essential.

“Every time I talk to people that are pursuing [women’s health], I'm like, please don't give up,” she said. “Keep up the fight, because we need more people inventing for women, because … in the categories we're working on, we're talking there's nothing that’s been invented for decades.”