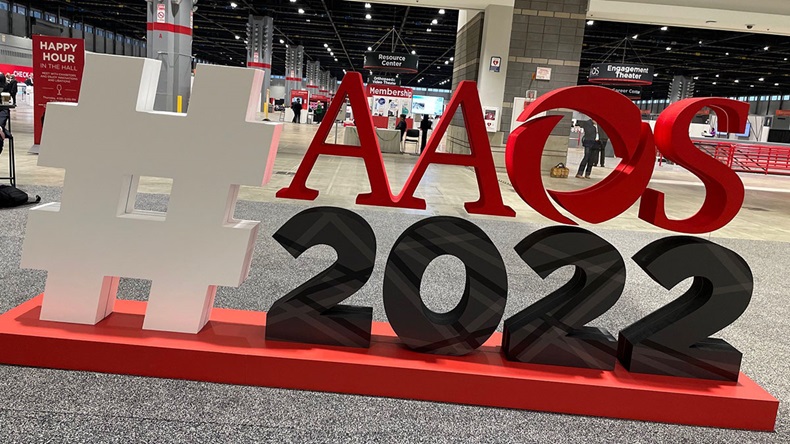 Medtech Insight had its ear close the ground. This article rounds up the top tweets from the exhibit hall where we met with representatives and leaders from Stryker Corporation, Zimmer Biomet Holdings, Inc., DePuy Synthes and Canary Medical to learn about new product launches and company plans.

Stryker launched its next-generation Insignia Hip Stem for total hip and hemiarthroplasty procedures. Insignia uses the new Total Hip 4.1 software, which allows surgeons to use data from a 3D CT-based plan to capture each patient’s unique anatomy. It offers three different tooth geometries along with a unique size-specific collar lengths and a range of femoral offsets.

Wells Fargo’s Larry Biegelsen wrote in his 24 March analyst note that Stryker expects Insignia to be “a major part of their hip business and drive adoption of the Mako [robotic] application as Insignia fills a gap in Stryker’s hip portfolio within the important and fast-growing direct anterior approach segment.”

At the live AAOS conference, exhibitors, including major orthopedics players, demoed digital innovations, software-enabled technologies, robotics and smart implants that are expected to create efficiencies in the surgical continuum and provide data to improve outcomes.

James Hept, senior marketing director at Stryker’s ASC business, told Medtech Insight that Stryker’s ASC “takes a very consultative approach” to understand what companies are looking for and is “fortunate to have the breadth and depth” to customize and maximize solutions.

“We believe the Q Guidance, when combined with the Airo platform is a precursor to spinal robotics for Stryker which will combine with a robotic arm either through Mako or Carden Robotics [acquired by Stryker in October 2019],” Zimmerman wrote.

As in the previous year, Zimmer Biomet showcased the evolution of its digital ecosystem.

WalkAI uses algorithms to identify patients who are predicted to have a lower gait speed 90 days after hip or knee surgery. The daily prediction is compared to anonymized, real-world data from an extensive ZBEdge database to identify when a patient’s recovery may not be on track based on predicted low speed.

WalkAI integrates with the mymobility Care Management Platform, which collects patients’ gait data through their iPhones. WalkAI has been rolled out globally to a select group of mymobility users and will be widely available as part of ZBEdge by the end of March.

Zimmer Biomet also showed off its new Optivu Mixed Reality Suite, which was developed in partnership with Microsoft, Zimmerman wrote in his 28 March analyst note.

Getting a demo at ZB’s new mixed reality tech used pre-op to help with instrument assembly/planning; intraop for remote consult, etc or learning; but can’t yet layer organs on top of patients in surgery; partnership with Microsoft to take tech to next level … #AAOS2022 pic.twitter.com/OcDQk30otf

It also has a surgeon demo to educate patients ahead of a procedure and a co-presence application for surgeon-to-surgeon collaboration. Another application in development is an integrated Rosa system application to bring the Rosa robotics platform into the surgeons’ field of view.

The company is currently working with Microsoft on hardware and software products, she added.

“Management did not provide commentary on pricing or the business model but noted that the system is commercial today,” Zimmerman wrote.

It works with Zimmer Biomet’s remote care management platform mymobility with Apple Watch and other components of the ZBEdge Connected Intelligence Suite.

Cushner said in a press release that the smart knee uses the same material and technology found in implanted cardiac devices such as pacemakers. It collects data every day during the first year following surgery, giving objective, accurate information on how the knee is functioning. He added that the battery that powers the device was made to last at least 10 years.

On the Persona IQ/mymobility interface, Zimmer Biomet is in ongoing conversations with the US Food and Drug Administration in an effort to generate data to prove clinical relevance with hopes to show better patient outcomes, Zimmerman wrote.

Zimmer Biomet said it has “1000s of patients” enrolled in the mymobility platform.

“Hopefully in two, three years from now, the data that we know about how you’re recovering from surgery may inform who gets surgery, may inform how your surgery is done,” he said.

The company collects millions of data points from the smart implants which are needed to train the algorithms that will then provide the insights to inform decisions.

“Right now, we’re developing the algorithms to look at the difference between the normal and abnormal … so once the algorithm has proven the ability to differentiate between a normal patient and a patient who has an infection [giving an example], then you now have a digital diagnostic,” he explained. “You take that data, you submit it to the FDA, and it becomes a diagnostic.”

He expects that the first FDA 510(k) submission could happen in 2023, noting that each indication will require a separate submission.

Sensor technology has seen significant improvements in the last five years with more battery power and sensors becoming smaller. Hunter expects that “over the next two-and-a-half years” sensors may also be placed in implants for the hips, knees and shoulders.

“Everybody thinks of us as an orthopedics company,” Hunter said. But Canary has plans to apply its sensor technology much more broadly.

This year, Canary will likely announce a partnership with a spinal company to integrate sensors during spinal fusion surgery; into silicone breast implants to detect possible scaring, encapsulation, or leakage; and the brain to provide critical information such as risk of rebleeding after surgery for a ruptured brain aneurysm.

“Cementless fixation is growing quickly, and this is a phenomenal opportunity for advancing patient care,” said orthopedic surgeon Ryan Nunley.

The company also demoed its recently acquired Cuptimize hip-spine analysis, a software that allows hip surgeons to understand when a patient has a problem, determine cup placement to mitigate risk and have clear indications of when to use dual mobility implants. Cuptimize analysis enhances Velys hip navigation’s surgical planning capabilities.

“This is an enhancement tool for customers that already have Velys … and those who have issues with spinal pelvic tilt … or have an opportunity to produce better patient outcomes as a result of not having this software.” Keith Palmer, WW VP hip reconstruction. #AAOS2022 #hip pic.twitter.com/51cFInnFm8

Abnormal pelvic tilt is present in about 20% of patients who require total hip arthroplasty, and the analysis tool allows surgeons to optimize cup positioning, which may help reduce risk of dislocation related to pelvic tilt, DePuy said.