Penumbra is expanding its virtual reality-based platform technology to assist stroke patients and other rehabilitation patients with its new Real System Y-Series with marketing plans for April. 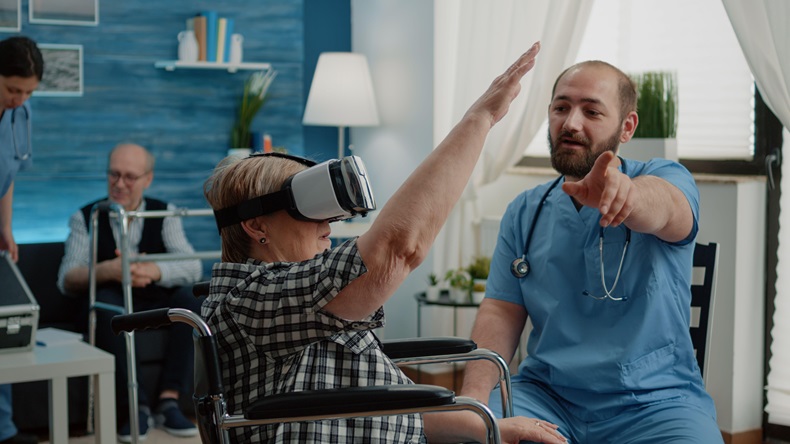 Health professionals and rehabilitation specialists will be able to preview Penumbra, Inc.’s latest rehabilitation product, the Real System Y-Series, at this year’s HIMSS conference, which will take place from March 14-18 in Orlando.

Penumbra first introduced the Real Immersive System in February 2020 after it was cleared by the US Food and Drug Administration in March 2019 for upper extremity rehabilitation to be used in rehabilitation centers with a therapist. It includes a head-mounted VR headset – equipped with sensors and electrical components that measure motion and direction based on feedback from sensors on the patient’s body – and a therapist tablet.

The company does not provide numbers of clinics using the system. But Gita Barry, general manager of Immersive Healthcare at Penumbra told Medtech Insight that “thousands of patients” have experienced it. 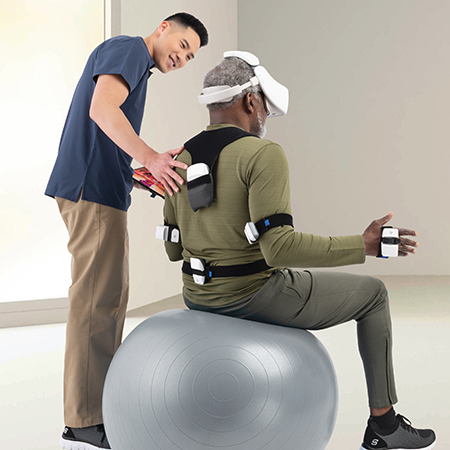 Last November, Penumbra donated the Real Immersive System to SoldierStrong, a non-profit organization that supports US military veterans and active military service members through their rehabilitation at more than 20 military and veteran US rehab centers.

“The goal with this platform is that the therapist – just like whether they are using a Theraband or a pair of weights or a fitness ball – is using this product as a tool for their patients,” Barry said.

The patient is transported into a virtual world to engage in game-based rehabilitation activities that aim to be both engaging and challenging. Examples of activities include the “Bird Forest,” where a patient uses functional movements to pick up a bird and place it into a nest; or uses trunk mobility and core control to steer an untethered balloon to bump other balloons in “Bumper Band.”

Today, there are 18 different activities in one world on the platform. The activities can be adjusted in the settings to build a progression for the patient with the VR system itself, which Barry finds sets the Real System apart from many other currently available VR-based rehabilitation products.

The new Y-System offers five new “worlds” with different types of rehabilitation activities such as “Real Pinball” that involves motor function and visual scanning. Another world that will be introduced at HIMSS is called “Mindful Market,” which is cognition-oriented, Barry said.

“It has a sandwich stand and it shows you a sandwich to make,” she said. Patients are asked to put the ingredients in the right order and deliver it to the person that ordered the sandwich.

The tablet allows the therapist to see what the patient is seeing via the VR headset and can follow the patient’s physical movements. When needed, the therapist can put the tablet down and adjust the patient’s movement during the rehab process “as they would with other types of equipment,” Barry explained. The therapist also controls the settings. “They decide how long the patient spends in the headset, they control all those aspects of the activity.”

“So as your body moves, you see your body move in VR and that is the magic of VR. Depending on the settings, we can show an arm moving that may not actually be moving or may not be moving at the same level if the therapist wants their patient to see how their arm can move to encourage them,” Barry said.

Penumbra CEO Adam Elsesser told investors during its fourth-quarter earnings call on 22 February the Real Immersive System will not be a big revenue source in 2022. But the company is focused on building the platform, having continued conversations with companies that can benefit from the VR systems, and exploring partnerships with third-party developers to provide content for patients on the platform.

Elsesser noted during the call that Penumbra is already having “important conversations with some of the leading companies across more than a dozen health care channels within which there are more than 50 million patients who can benefit,” he said. “That really is the best way to measure whether we’re doing this the way we had anticipated or not.”

The company will offer more updates on its conversations with users and the third-party developers later in 2022, he said.

The list price for the equipment is around $5,000 and the activities fee is around $50 a month, Barry said, adding that each facility may have their own list price.

From Catheters To Rehab

In 2017, Elsesser visited Sixense, a company specializing in VR hardware and software, which led to the partnership to build the Real Immersive System. Penumbra acquired Sixense in September 2021 for an undisclosed amount.

Barry said that company initially started looking at technology to evaluate how to help stroke patients in the acute setting and that has evolved into the rehab setting.

Last August, Penumbra also introduced the i-Series, a wellness product that uses a VR-enabled headset with gaze-based navigation and activities to support people with depressed and anxious moods, pain and discomfort, loneliness and age-related challenges.