The Norwegian company is applying a simple physiological response to costly and tricky-to-manage conditions, its leaders told Medtech Insight. 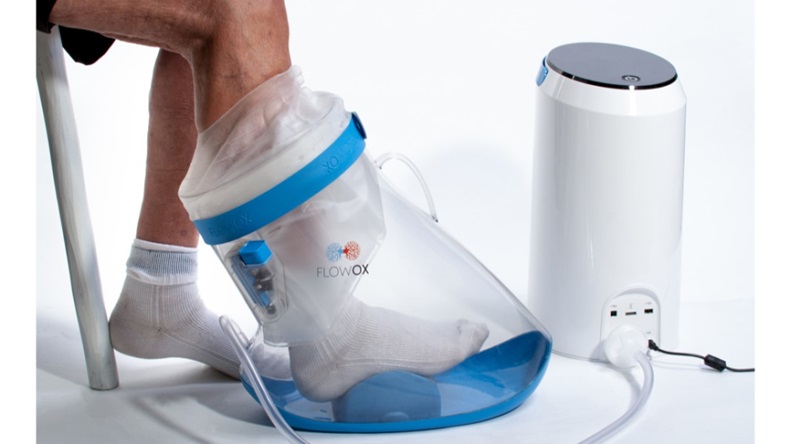 In an age of minimalist design and increasingly complex function, startup devices can often appear, from the outside, confusing, but Oslo-based Otivio AS has bucked this trend with its FlowOx device for the treatment of vascular flow deficiencies.

FlowOx comprises of a sleeved compartment for a patient’s lower leg and a pumping system connected via tubing. When powered, FlowOx evacuates approximately five percent of the air inside, creating a pressure of roughly -40mmHg. This happens in a cyclical pattern – 10 seconds on, and 7 seconds off – for up to an hour. The cycling increases blood flow velocity within the leg by almost 50%.

It also helps patients’ wounds heal faster. Results of a small-scale, 16-week trial of intermittent negative pressure in spinal cord injury patients showed negative pressure therapy aided the healing of chronic leg and foot ulcers, which are a huge burden on health care systems. A study of UK-sourced data from 2007 to 2017 found that the annual cost of caring for a patient with a venous leg ulcer was almost $11,000 per year, with nurse visits accounting for the bulk of this spending.

Medtech Insight spoke to Claus Kjærsgaard, Iacob Mathiesen and Andreas Mollatt, the company’s head of business development and strategy, chief strategy officer, and CEO, respectively, to find out more about the FlowOx technology and how the Scandanavian company plans to expand.

Mathiesen said that FlowOx was not always primarily indicated in aiding patients with vascular deficiencies. While working at the University of Oslo, he made contact with two medical students who realized that negative pressure, when applied to the skin, improved blood circulation in the immediate area. The two spent nearly nine years developing this technology, designing it to heat or cool patients’ blood before going bankrupt.

Mathiesen bought the bankrupt company in 2009 and started Otivio in 2010.

“We continued the work on cooling patients, primarily on stroke victims, but could not get clinical trials up and running,” he said. “The trials were approved, and we had a working device, but a lack of funding and difficulties with hospitals made it impossible.”

Mathiesen explained that instead of trialing the device on stroke patients, the hospital allowed the company to trial it on patients who were due for amputations due to gangrene and associated pain.

“We saw that FlowOx really improved oxygenation of these tissues. This set us down the path of focusing on peripheral arterial disease,” he said. “We’ve made two devices now (FlowOx V1 and FlowOx V2) and are running a number of clinical trials.”

FlowOx has been CE marked for the treatment of peripheral arterial disease, and the company is beginning to work on its 510(k) submission for the same indication.

Reaching The Clinic, The Home, And Reimbursement

FlowOx is already being used in Norway. Mollatt said that agreements had been made with “most of the big hospitals.”

Expanding outside Norway has been challenging. The company is working on moving into the UK and Germany, “but reimbursement is the key challenge,” he said. “Clinicians want it, patients want it, but it’s a novel technology. We aren’t replacing anything else, so there isn’t any reimbursement set up.”

Moreover, in patients with peripheral artery disease, “there seems to be a certain disregard to willingness or awareness to pay for them, as it’s viewed as a self-inflicted disease with many lifestyle-related comorbidities. Changing this will take time.”

Incumbent technology is also hindering Otivio’s expansion, according to Mollatt.  Devices already exist for improving peripheral blood flow, but they have been “institutionalized - only being used in hospitals in clinics – and are very big, very expensive and very inconvenient. … FlowOx has been designed to be an intuitively easy one to use both at home and on the ward.”

To access clinics and hospitals, Otivio is relying on distributors, who take a cut of device rental fees.

Kjærsgaard explained that the current reimbursement level means that Otivio recommends that its distributors a charge between €22 and €29 a day for FlowOx, with the treatment cycle for vascular patients lasting a total of 90 days.

“At that point, you evaluate whether the patient is getting the clinical effect they are looking for, and if they are, you can judge whether you want another cycle of treatment, or to terminate the treatment,” Kjærsgaard said. “That’s a very traditional model. There are other financial models, but the key point is that it’s a home-use device that is prescribed by clinicians.”

Otivio is planning a direct-to-consumer (DTC) campaign to reach patients in their homes which would allow the company to market its technology to multiple sclerosis (MS) patients.  By distributing FlowOx directly to patients’ homes patients could access the therapy they need, when they want it, without daily disruptions in the form of clinical visits.

The company told Medtech Insight that its early clinical research on MS patients showed using FlowOx can reduce spasticity and pain and, in some patients, improve balance and mobility.

FlowOx has yet to receive a CE mark for this application, so reimbursement for it is still a long way away.

"Mobilizing patients and patient advocacy groups will be part of our reimbursement strategy. Creating a strong pool of demand amongst patients and potential patients will facilitate negotiations with payers." – Claus Kjærsgaard

“We are pursuing the DTC model for MS patients first because of the patient population,” Kjærsgaard said. “The average age of diagnosis is approximately 36, so you have a population that is digitally capable. In Scandinavia, particularly, you have a fully digitized society.

“If you take these combined factors, you realize that this model is possible. When you then add to that a non-invasive, safe device that triggers an effect similar to exercise, you more or less have all the ingredients for a perfect DTC model.”

The company is going to pilot the MS-associated DTC model in Scandinavia first and “see how that goes before we start scaling it up,” he said.

An Elephant In The Room

The company is aware that technology that provides tangible benefits can be unaffordable for patients. According to Kjærsgaard, Otivio has a “conceptual price” of €150 per month to rent and use FlowOx. But many MS patients cannot work, making affording this price potentially impossible.

"Something that is distinctive about the MS population is that they are well organized and have very strong patient advocacy, both locally and regionally. That’s an opportunity for us to pursue charity partnerships,” Kjærsgaard explained.

“We know from research that patients are actually quite willing to pay out of pocket if they get symptomatic relief. Our position is that FlowOx should be fully reimbursed if it provides the relief and quality-of-life improvement we believe it will.

“There is also the health economic argument that we believe FlowOx will reduce other costs and increase productivity. Patients will be able to be active for longer and work either full time or part time if their mobility is restored.”

"We are not only for the rich, but it’s where we have to start. We will work hard to argue that FlowOx should be made available for all, disregarding social status and income.” – Andreas Mollatt

Kjærsgaard argued that “it is not fair to prevent the patient who has the financial capabilities to purchase this out-of-pocket to do so,” and that “mobilizing patients and patient advocacy groups will be part of our reimbursement strategy. Creating a strong pool of demand amongst patients and potential patients will facilitate negotiations with payers.”

Mollatt also highlighted that MS patients are, economically at least, in a relatively strong situation compared to some other patient groups.

“MS affects patients across all social classes, as opposed to peripheral artery disease. Most of these patients are fairly young, and are married, so have a household income,” he said. “€150 is manageable for the top quartile of household income. We are not only for the rich, but it’s where we have to start. We will work hard to argue that FlowOx should be made available for all, disregarding social status and income.”