The Glaswegian company is tackling a tricky area of health care with its intelligent sensor and cloud processing technologies. 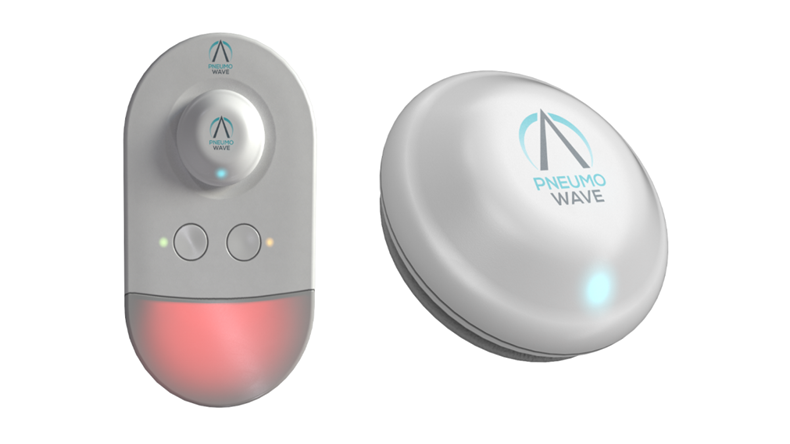 Separate from COVID-19, another public health crisis has continued to evolve. The opioid crisis continues to kill vast numbers because of the over prescription of powerful painkillers and increasing availability of illicit drugs such as heroin and fentanyl.

A Glaswegian company, PneumoWave, has begun working on technology to help minimize these drug deaths after its founders realized something needed to be done about the rising number of drug deaths in Scotland.

“We started with a focus of opioid induced respiratory depression. In my prior job as a forensic medical examiner, we were seeing an upsurge of deaths in Scotland from opioid overdose,” CEO of PneuomoWave Bruce Henderson told Medtech Insight. “Opioids switch of parts of your brain that control breathing and that’s unpredictable and accidental.”

At the core of the company’s technology is its hardware platform. The first component is the PneumoWave sensor. The infinitely reusable sensor is a round disc 1.5 inches in diameter, and 0.6 inches in depth. On its underside is a 3-day replaceable adhesive patch which is stuck to the patient’s chest.

As the patient breathes, data concerning breathing frequency, depth and regularity is recorded. This data is then sent to the PneumoWave Hub, which is a Bluetooth low energy collection hub. The data can be stored on the Hub itself for up to 30 days and can also be uploaded directly to cloud servers for analysis.

The final hardware component is the PneumoWave Patient Gateway. This features an IEC 60601-1-8-compliant audible and visual alarm for alerting health care professionals or family members whether there is an issue with a patient’s breathing.

“Existing platforms for respiratory patients tend to capture episodic data actively collected from the patient, such as blowing into a machine, or wearing a pulse oximeter.”

“Not only does that give you a limited picture of what’s happening with the patient, but it also means that you can’t actively detect an issue that may be evolving,” said Henderson.

“We knew that patients needed a continuously worn sensor and the ability to continuously collect data from it and analyze it in real time.” – Bruce Henderson

“We knew that patients needed a continuously worn sensor and the ability to continuously collect data from it and analyze it in real time.”

The validity of this continuous data capture approach will be assessed in a clinical trial announced on 19 January. The trial, which is run in partnership with King’s College London’s Institute of Psychiatry, Psychology & Neuroscience will look at preventable drug deaths, and is part of a national program of clinical research investigating digital health tools for respiratory health conditions.

“We’re expecting to get our first regulatory clearance in quarter three of this year,” said Henderson.

The Push For Reimbursement

Henderson explained that the commercial strategy PneumoWave is to rely on hardware sales and revenues generated from its data analytics platform, using preexisting remote patient monitoring reimbursement codes in the US.

“These RPM codes, although they’re not widely used, are at least available. However, there aren’t a lot of companies generating substantial revenues from them.”

“We also do far more than we would get reimbursed for. Most [of these codes] are for retrospective reviews of data stretching for 20 minutes or half an hour, but we are doing continuous 24/7 data collection.”

Henderson explained that current remote patient monitoring codes typically lead to revenues of between $500 and $1500 per patient, per year, but that there is some uncertainty as to how much PneumoWave would get from these.

As a result, he said he thinks “PneumoWave will go for a novel code, but that’s a longer pathway that could take us several years.”

Henderson also touched on the potential, although now increasingly unlikely, chance that PneumoWave may gain reimbursement thanks to its device being awarded breakthrough designation by the US Food and Drug Administration. (Also see "Cures 2.0 Throws MCIT A Lifeline, And More" - Medtech Insight, 17 Nov, 2021.)

“Breakthrough designation means that under MCIT [Medicare Coverage of Innovative Technologies] we would have automatically been granted reimbursement. Trump passed it, but Biden repealed it to go back through the Senate. We do believe that the particular problem we are targeting is highly likely to fall under any new reimbursement rules.”

“There’s an appetite on both sides to have a program that enhances reimbursement for life saving devices that get through to patients, but we can’t guarantee PneumoWave will be covered.”

Henderson did say, however, that the company does not need the MCIT rule passed immediately. Because of the inherent life-saving potential of PneumoWave’s technology, grant money is readily available. The company also raised nearly $3m in a series A financing round, with another $10m raise in the works.

The total addressable market of Pneumowave’s technology is significant. There are between 2 and 3 million people diagnosed with opioid use disorder in the US, with 43.3 opioid prescriptions given per 100 persons per year.

And according to Henderson, PneumoWave’s sensor will be capable of not only detecting respiratory depression, but also general opioid misuse – which is a key concern when physicians prescribe them.

Moreover, there are avenues for PneumoWave to use its technology in monitoring patients with COPD, with clinical trials projected to start over the next few years. COPD studies currently lack continuous longitudinal data, and the belief of PneumoWave is that continuous monitoring can spot problems in time for less-intensive treatments such as antibiotics to stop hospitalization.

“We are in discussions to partner in a UK-wide clinical trial looking at COPD patients who are more resistant to typical episodic treatments,” said Henderson. “Our respiratory depression product will come to market first, but we shouldn't be too far behind in terms of meaningful clinical outcomes data for COPD.”

Comparatively, the market for COPD dwarfs that of opioid takers. Conservative estimates state that approximately 400m people worldwide suffer from COPD. Low cost, longitudinal monitoring of patient volumes this large is likely to be a huge revenue source for any company successful at commercializing it.

Henderson accepted that PneumoWave’s technology is operating in a tricky area of health care. Measures aimed at combating drug deaths are often accused of encouraging drug use.

“It’s clear from every country in the world that where you offer treatment services and where you support people that the outcomes are far better. We’ve got to keep pushing to get people to realize that – it's emotive, 70,000 people die in a year [from opioid overdose in the US].”

“PneumoWave is not the solution to the problem, but you’ve got to keep people alive for long enough to access treatment. There are some states [in America] where that’s going to be very difficult to achieve. There’s a belief that you just need to pull yourself together and that it’s some kind of moral wrong [to help].”

“PneumoWave is very obviously aligned with pharma companies [selling rescue drugs such as naloxone]. There are things [opioid takers] can access, and reimbursement can be an issue, but anyone that wants access should get it.”

Pneumowave Breathes Easier In Its Fight Against Opioid Deaths After Completing £7.5m Raise