The Association for the Advancement of Medical Instrumentation’s new technical information report guides pump makers as they test their devices for a variety of clinical scenarios and conditions. TIR101:2021 also tackles flow rates, metrics, labeling, and more. 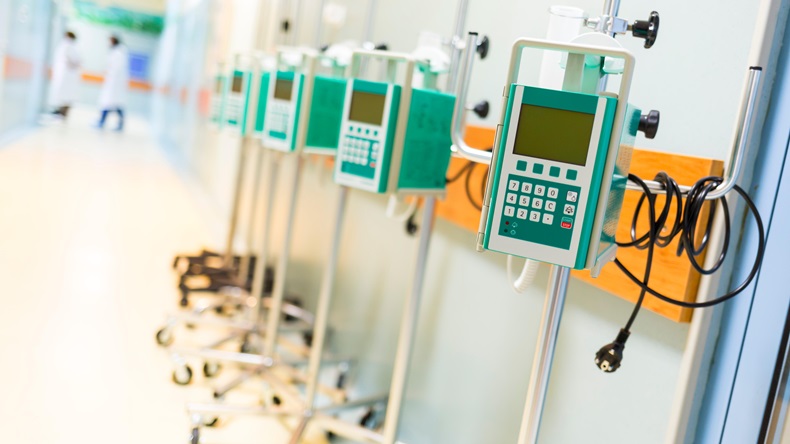 When international standard IEC 60601-2-24:2012 was released by the International Electrotechnical Commission, the information and guidance it provided to manufacturers of the notoriously troublesome infusion pump was cutting-edge.

But fast-forward nine years, and while the standard is still the go-to guide for pump makers across the globe, it hasn’t kept up to speed with how the devices are used by health care providers in a variety of clinical settings.

IEC 60601-2-24 – “Medical Electrical Equipment – Part 2-24: Particular Requirements for the Basic Safety and Essential Performance of Infusion Pumps and Controllers” – is “already kind of long in the tooth” and probably won’t be updated for another four years, Ben Powers, VP of infusion systems at Massachusetts-based Ivenix, told Medtech Insight.

“It takes a long time to update [standards], and we felt there was a real gap in how people were testing and how they were disclosing the performance of infusion devices,” said Powers, who’s also co-chair of the Infusion Device Committee within the Association for the Advancement of Medical Instrumentation. The AAMI committee “wanted to do something that could help get clinicians better information sooner, and then also help guide manufacturers so that as they’re developing technology, they know how it needs to perform in the field.”

“Technology is not keeping up with health care needs, especially in the infusion device space.” – Ben Powers

While pump technology has remained relatively the same since IEC 60601-2-24:2012 was released, infusion practices have “markedly increased in complexity and sophistication of clinical usage,” the new TIR says. That can lead to uncertainty among clinicians about how a pump will perform across a wide swath of conditions for which it hasn’t been tested.

“Technology is not keeping up with health care needs, especially in the infusion device space. Most of the pumps that are out there were designed 20 or 30 years ago, and they might have newer software and newer cases on them, but the mechanisms behind them are very old,” Powers said. “The way that [clinicians] need to interact with them … has changed a lot over that time, but the pumps have not.

“In the role of standards and committees, there’s only so much we can do to drive innovation from a technology standpoint,” he added. “But what we can do is define test conditions that better represent the changing clinical practice, and that’s what we tried to do” with TIR101.

The new technical information report says some methods for performance testing and reporting found in IEC 60601-2-24 don’t offer “clinically relevant and actionable” guidance, and notes that TIR101 “seeks to correct, augment and strengthen the standard, providing designers and users with more complete and usable characterization of device behavior under a range of real-world clinical conditions.”

While IEC 60601-2-24 focuses mostly on testing under nominal lab conditions – with a smattering of deviations around flow rates and outlet pressures – TIR101 “broadens the scope of testing to include additional test cases spanning the operational range of the device,” the document says.

“The standard really only tested a couple of rates – I think for most pumps it was 1mL an hour and 25mL an hour, which is a very small subset of the range that are actually used in the clinic,” Powers said. But the TIR “now spans the entire rate range for a given device. We go from the minimum selectable rate all the way up to the maximum selectable rate, with a few key rates for apples-to-apples comparison in the middle, because the minimum and maximum might change based on the pump, the vendor – whatever the case may be.”

He went on: “That’s a real shift and an improvement, where we’re spanning the entire performance range of the system so clinicians will know what’s going to happen when they program the lowest and the highest rates.”

“This TIR introduces a quantitative measure for start-up time delay,” the document says. “It also introduces a measure of short-term variability that relates back to medication half-lives, enabling clinicians to understand how the pump performance can impact patient outcomes based on the pharmacokinetics of the drugs they intend to deliver.”

Powers further explained: “The previous way of looking at flow variability – people call them ‘trumpet curves’; that’s what’s in the IEC 60601-2-24 standard – nobody knows how to apply that to clinical use and what it means in the clinical environment. This new way of looking at things looks at coefficient of variation, which can be really thought of as how much the concentration of drug is going to change in the patient’s blood for different half-life of drugs at different flow rates.”

The new TIR also lays out a standardized approach for pump testing and labeling.

“A shared approach to test methods, conditions and disclosure enables for more straightforward comparison between similar products,” TIR101 says. “This is a benefit to regulators, clinicians and industry, as each is looking to compare and contrast performance of different products or technologies.”

The Association for the Advancement of Medical Instrumentation’s updated TIR12:2020 aims to standardize instructions for use for processing and increase awareness of how end users interpret IFUs. A co-chair of the AAMI working group that oversees TIR12 explained more in an interview with Medtech Insight.

It took AAMI’s Infusion Device Committee roughly two years to write and publish TIR101:2021. Powers points out that “a couple of things led to it taking so long,” the first being that infusion devices have a very broad set of use cases, both in and out of the clinical setting.

IEC 60601-2-24 “is trying to look at hospital-based infusion pumps, intravenous infusion pumps, enteral infusion pumps – feeding pumps – and then also ambulatory pumps and syringe pumps. It spans a lot of different devices, and then each of those devices has a really broad set of use cases within the hospital,” he said. There’s “a very broad set of flow-rate ranges, viscosity ranges, pressure ranges – it’s just a really broad matrix of uses. And so trying to distill that down into a comprehensive but finite set of tests was challenging.”

Engaging with and getting feedback from stakeholders – including device makers and the US Food and Drug Administration – also added time to the clock, as did COVID-19. Powers estimates that the pandemic stretched the TIR’s development time by an extra six to 12 months.

Still, he concedes, two years is too long to craft a technical information report.

“We all need to find ways to work faster,” Powers said. “Broadly speaking, technology is moving very fast, but health care technology is not moving that fast, and I think that’s a combination of a long development cycle, long review cycle, and then lagging regulations or standards.

“On all fronts we need to work together as a community to figure out how we can move through the process more quickly, and [that requires] a lot more collaboration between the regulators and device manufacturers – and between standards committees and both regulators and manufacturers – so we’re all working toward the same goal,” he said.

Despite having just put out TIR101, the Infusion Device Committee isn’t resting on its laurels. It’s working on another pump-related TIR that will focus on upstream and downstream occlusions, as well as how the devices mitigate and respond to issues or hazards when there’s air in the line.

All of that material “is currently lumped into one [draft TIR], but it’s quite likely it’ll split into two, because they’re kind of different topics and it’s proving hard to cram them into one,” Powers said. “But that’s a little of the sausage-making that’s going on right now.”

And after that technical information report is finished, there are other areas that the committee could delve into, including pump reliability and the management of alarms.

“We’re debating whether or not it’s best to just address those in the international committee, or if we’ll end up doing additional TIRs on those topics,” Powers said.