Public health organizations including the Facebook group ASHES/E-Sisters, and the National Center for Health Research, are pushing for wider distribution of and a big impact from the "The Bleeding Edge" Netflix documentary. They tell Medtech Insight that they will continued to lobby Congress and US FDA to put more safety regulations and protocols into place for devices. 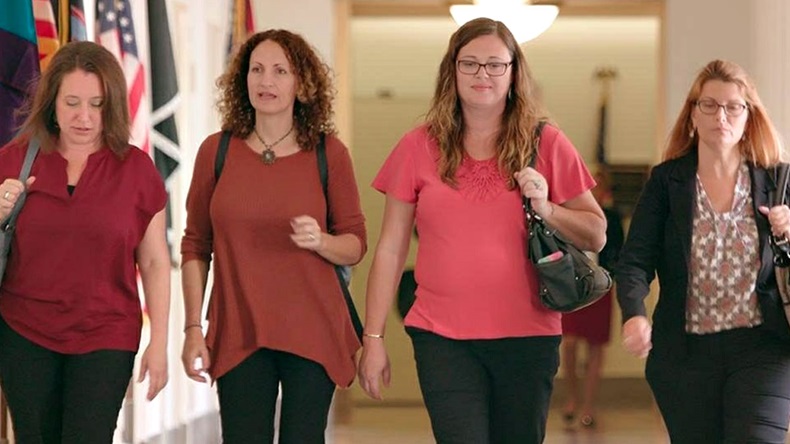 Health groups including Advocating Safety in Healthcare, Essure-Sisters (ASHES), and the National Center for Health Research (NCHR), led by Diana Zuckerman, say they plan to use the documentary film "The Bleeding Edge," to educate the public on harms that can be caused by medtech.

The film targets four products, among others – Bayer’s Essure sterilization device, Johnson & Johnson’s ASR metal-on-metal hips and ProLift pelvic mesh products, and Intuitive Surgical’s da Vinci surgical robot – in an effort to illustrate how device manufacturers and FDA have leveraged the device regulatory system in the last 20 years to permit many novel medtech products to slip onto the market before thorough safety testing.

But participants in the film say they are not satisfied with talking about negative encounters they had with just a few medtech products that initiated their activism. They plan to use the documentary as a platform to push for more thorough device oversight from FDA. In many cases, advocacy groups that initially formed around individual patients’ experiences with faulty hip replacements or painful encounters with pelvic mesh or the Essure implanted coils, are coming together and joining ranks to tackle other medtech safety issues.

ASHES leaders tell Medtech Insight they have started working with other advocates on a new platform called “Medical Device Problems.”

The documentary premiered on Netflix in July and it has since captured significant media attention. The device sector has pushed back against the film, calling it a one-sided "hit job" against the industry; FDA is also critical of the film and defends its approach to protecting patient safety. (See sidebar, "Industry, FDA Defend Innovation As A Force For Good.")

Industry, US FDA Defend Innovation As A Force For Good

At this year's MedTech Conference, AdvaMed said it will go the distance to defend industry against unfair attacks, and it downplayed assertions made in The Bleeding Edge documentary. FDA's Jeff Shuren made the case that supporting innovation and protecting patient safety go hand-in-hand.

The film has provided a high-profile platform to some grassroots patient groups that were formed based on personal experiences with medical devices. One, in particular, is ASHES, founded by Angie Firmalino, who had the Essure coils implanted several years ago after having her last child, but later starting experiencing pain, heavy bleeding and auto-immune system responses to the devices. In her online search for medical answers and physicians who might be able to remove the device, she launched a Facebook page for other women who had similar complaints. The effort ultimately mushroomed into a full-fledged, non-profit advocacy organization of thousands of similarly afflicted women searching for solutions to their Essure-related health issues, she says.

ASHES leaders say they  “intend to extend our advocacy work to focus on many different medical devices,” and have started working with advocates and other groups on a new platform called “Medical Device Problems.”

“As far as medical device approval in this country, as depicted in 'The Bleeding Edge,' there is a great deal of work and change that needs to bring about stricter, and more thorough, approval processes,” the group’s founder Angie Firmalino and her fellow “Essure Sisters” Amanda Dykeman, Amanda Rusmisell and Holly Ennis told Medtech Insight in a Sept. 13 statement responding to questions about their plans to leverage the documentary.

Bayer announced July 27 (within days of release of the documentary on Netflix) that it will stop US sales of Essure at the end of this year. But spokeswomen for ASHES say that’s not fast enough to halt injuries to women from the device.

“We will continue to help women harmed by Essure,” ASHES told Medtech Insight. Shortly after release of the documentary – which included graphic X-ray photos of multiple Essure coils trapped in some women's bodies that had either been misplaced, migrated out of Fallopian tubes, or broken into fragments while being removed – Bayer said it was pulling the device off the market by Dec. 31. But the firm said it would continue to allow gynecologists’ and obstetricians’ stockpiles of the metal coils to be implanted through the end of 2019.

The E-Sisters say they are galvanized to do more to keep other patients from harm. “We will continue to fight to get Essure off the market immediately,” they said.

“It is unacceptable that some physicians are buying as much inventory as possible until Bayer ceases sales on 12/31/18, and will continue to implant until 12/31/19, especially considering all the outdated marketing material women are still seeing in their doctors’ offices,” the group said in their statement.

Diana Zuckerman says she has also been interviewed “for another documentary I hope will have an important impact.”

The group is also “currently working to gain traction in Congress on H.R. 2164, The Medical Device Safety Act,” they said. H.R. 2164 was reintroduced in the House on April 26, 2017 by Rep. Brian Fitzpatrick, R-Pa., and the now-deceased New York Democrat Louise Slaughter. It was first introduced in the 2015/2016 congressional session by Fitzpatrick’s brother, Michael Fitzpatrick, R-Pa. (Also see "Reps. Fitzpatrick, Slaughter Introduce Device Defect Reform Bills" - Medtech Insight, 8 Jun, 2016.) The bill would extend liability in the courts for all PMA-approved, Class III medical devices, removing pre-emption protection that was solidified by the Supreme Court in in 2008. (Also see "In Victory For Device Industry, Supreme Court Favors PMA Pre-emption" - Medtech Insight, 25 Feb, 2008.)

In the documentary, members of the ASHES group are followed as they visit various members of Congress, including Medical Device Safety Act cosponsors Rosa DeLauro, D-Conn., and Jan Schakowsky, D-Ill., as part of their lobbying in favor of H.R. 2164.

Zuckerman told Medtech Insight that she and her group, NCHR, is “working with the filmmakers (Kirby Dick & Amy Zierling) to try to help get the message out to the largest audience possible about inadequacies of current device reviews.”

In the film, Zuckerman points out differences between how devices and pharmaceuticals are approved by FDA. She notes, “Every PMA is not that rigorous. It’s not like with drug approvals, which call for at least two studies, involving thousands of people.

Zuckerman said she hopes "The Bleeding Edge," and follow-on coverage, “Will eventually help persuade the FDA to stop lowering the standards for approval and clearance of medical devices.”

There is more to come, Zuckerman suggests. She says she has also been interviewed “for another documentary I hope will have an important impact.” And, she noted, due to the media attention to "The Bleeding Edge," “reporters are paying attention to the FDA’s shortcomings on devices in ways they never did before.”

In her view, however, following the film, FDA is still going in the wrong direction. She pointed to FDA's recently issued plan to significantly reduce the number of "re-reviews" it conducts of third-party 510(k) reviews. (Also see "Third-Party Review: FDA Seeks Tangible 510(k) Results Over Next Three Years" - Medtech Insight, 13 Sep, 2018.) She said it's "a plan to lower standards for devices again.” FDA and industry officials argue the program is intended to streamline the path to market for appropriate products and product updates, and give FDA more time to focus on higher-risk devices.

In more fallout from documentary, Alaska orthopedic surgeon Stephen Tower – who chronicles in the film how he had to have his own Johnson & Johnson/DePuy ASR hips replaced to end his cobalt toxicity issues – built a website at his Tower Orthopedic and Joint Replacement Clinic (TJRC) where he discusses how he continues to help other patients who have suffered adverse health consequences from their metal-on-metal replacement hips.

The film shows what happened to Tower, and other patients injured over the last 15 years by either the DePuy ASR replacement hips, or other metal-on-metal hips, which sometimes fracture and can result in heavy-metal toxicity issues.  J&J issued a recall of thousands of ASR hip devices in August 2010 due to their higher-than-average fracture rates. (Also see "DePuy recalls discontinued hip replacement devices" - Medtech Insight, 31 Aug, 2010.)  Other metal-on-metal hips have been recalled since then, and thousands of patients have filed lawsuits against device makers over the products.

In the documentary film, Tower and Robert Bridges, an Alaskan diagnostic radiologist, explain how research into Tower’s own cobalt toxicity issues from metal-on-metal hips, discovered in part through Bridges’ brain imaging, compelled Tower to help other patients get treatment for their neurotoxicity symptoms linked to the hips.

“So, I have been studying these patients with these issues.  But I don’t think I’m the guy who should be doing these studies; I think that the Centers for Disease Control and Prevention (CDC) or FDA should do it,” Tower says in the documentary.

Zuckerman also hopes that after the November mid-term elections, leadership in Congress will change, and make it easier for House and Senate members with interests in device safety to push forward health and safety legislation.

Another public interest group featured in the film, Public Citizen, also argues that there are comparatively lax standards for FDA device reviews. Public Citizen’s Director of Health Research Michael Carome states in the documentary, “Most people believe devices get appropriately tested, but that’s not always the case.”

Hubbard, and other ex-FDA managers interviewed for "The Bleeding Edge" point out that class III (highest-risk) devices don't always require extensive clinical testing during the PMA approval process, while the majority of devices “are approved by a 510(k) process that only asks sponsors to come up with a substantially-equivalent predicate” in order to be cleared.

Kessler also critiqued FDA’s adverse event reporting system, noting it “is tremendously under-utilized, because it’s a voluntary system,” while University of California at San Francisco cardiovascular surgeon Rita Redberg said, “If a physician observes an adverse event, they do not necessarily have to report it. It’s estimated only 3%-4% of events get reported to FDA.”

Zuckerman says that widespread public release of the film’s illustration of medtech safety problems seems only to have made manufacturers “defensive, rather than making them consider how much patients have been harmed.”

She says that the work of NCHR, and others, “has had quite an impact, because when we educate the public in a documentary film or a TV news program or newspaper, that results in pressure on the FDA and device companies.”

Zuckerman also noted, “When I give talks on devices – to students, physicians, patients, the media and others – they are shocked by what they learn. I think 'The Bleeding Edge' will have a considerable impact,” she concluded.