Two Pore Guys has developed a digital, hand-held single-molecule biosensor capable of detecting a wide array of molecules including viruses, bacteria, antibodies and pathogens. The company plans to send the first-generation of the developer kits to strategic partners in mid-2018 and already has inked agreements with human diagnostics, animal health companies and agribusiness giant Monsanto Co.

Editors' note: This article was updated Dec. 18 to clarify that the company plans to send out the first-generation of its developer kits to strategic partners in mid-2018, but it won't actively be "marketing" the product until an undisclosed later date.

Dan Heller, cofounder and CEO of six-year-old Santa Cruz, California-based Two Pore Guys, is also the first to admit that this is a very ambitious, bold statement.

"The biggest challenge has been convincing people that it's actually true," Heller told Medtech Insight. "The statement is a very provocative proposal that you could test for anything with such a small, inexpensive device and have levels of accuracy and sensitivity that rival lab equipment."

That said, he's already convinced both investors and dozens of companies, including agribusiness giant Monsanto Co. that 2PG's technology is on the cutting edge. As a result, Two Pore Guys is gearing up for serious growth.

The company recently raised $24.5m from Khosla Ventures in a Series A round, bringing its total funding to $31.5m. Heller said the company expanded its office from 16,000 square feet to over 25,000 in the past few months and will increase its staff to 100 members by year-end, up from 40 employees in April. Two Pore Guys is also scaling up manufacturing with plans to ship its first-generation developer kit to strategic partners by mid-2018. (See Figure 1.) 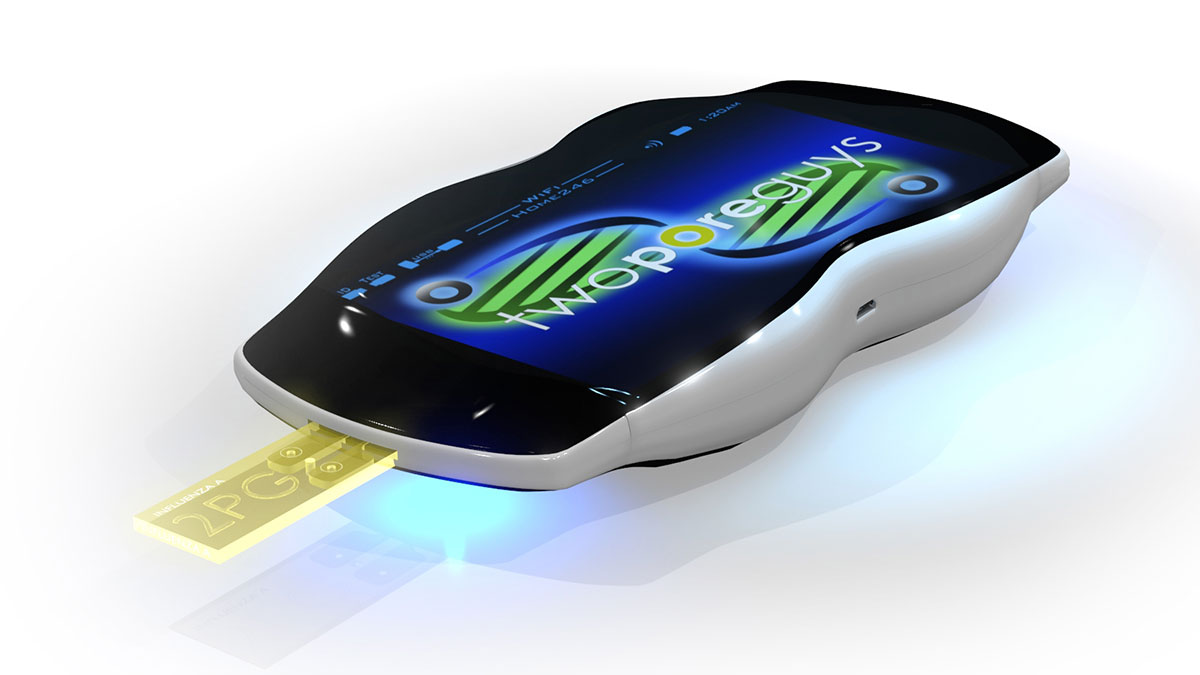 On October 12, Two Pore Guys announced it entered into an agreement with Monsanto to evaluate its 2PG system under laboratory and field conditions. The two companies will collaborate on developing assays to detect certain biomolecules in crops, pests and pathogens. Asked about the business model, Heller draws an analogy of using the Apple phone and apps. "We make the pure technology itself very much like Apple makes the phone, but we don't really make the apps," he said. "They leave app development to the software makers. We don't target any customer or market or test. We simply make the platform and other people make the test for the market."

"We make the pure technology itself very much like Apple makes the phone, but we don't really make the apps," Two Pore Guys CEO Dan Heller says.

To date, the device-maker has developed more than 35 tests for partners, he said. Monsanto, however, is the only company to be named publicly as a collaborator. "We're not allowed to talk about our partners," Heller said. He said Two Pore Guys has signed similar contracts with human diagnostics, agricultural and animal health companies.

"The most common tests that people are producing for our platform is for cancer detection, infectious diseases, STDs and agriculture – like trait detection and pathogens," he said. For animal health companies, the focus is on developing companion diagnostics.

Board of Directors: Not disclosed

Individual investors put out the $8m in 2016

Two Pore Guys has come a long way since it was first incorporated in 2011.

All three cofounders met at UC Santa Cruz. Heller started the Center for Entrepreneurship at UC Santa Cruz in 2010, where he met William Dunbar, who was a professor in the Computer Engineering department. Dunbar had worked on technology that was licensed to Oxford Nanopore for their genome sequencing, but those used biological pores (proteins), which were fraught with technical problems, Heller said. Dunbar turned to silicon nanopores, which he found were more stable, cheaper to make and easier to use.

"It was [Dunbar's] foundational patent on using two solid state nanopores to control the motion of DNA that improved on the methods Oxford was using and which became the foundation of 2PG’s core technology," Heller said.

They formed Two Pore Guys with licensed technology from UC Santa Cruz in 2011, but did not start development until Trevor Morin, a biochemist at the university, came on board in 2013 and is now Two Pore Guys' director of biochemistry. That's when the trio left UC Santa Cruz to join the company full-time to bring the technology to market.

Heller said the original plan was to apply the technology to sequencing DNA, but after he meet Morin, he realized that there was much greater marketing potential in point-of-care testing. 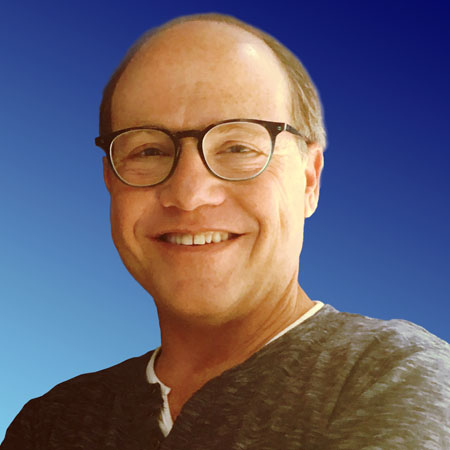 The "secret sauce" in technology are simple and inexpensive silicon chip passive sensors that can examine a wide array of analytes, Heller said. The reader's simplicity allows for rapid inexpensive testing with high sensitivity.

Short-term plans for Two Pore Guys call for getting the device into the hands of professionals – doctors, veterinarians, farmers, transportation companies – who would work with Two Pore Guys on developing assays or develop their own assays. Two Pore Guys' technology is an open platform, enabling anyone to license their technology and incorporate it into their existing diagnostic testing system.

"We characterize our technology as a platform where anybody in diagnostics can make tests for our platform," Heller explained. The assays are sold like apps for smartphones, which leaves it to the assay developer to create a test for a specific target, set pricing and market the test.

While the Two Pore Guys device is not yet available commercially, it will be up to the assay developers to seek marketing approval from regulatory bodies. With the FDA no longer requiring 510k certification for Class II devices, Two Pore Guys intends to use ISO-certified manufacturing and cGMP, as required for regulated tests.

"I think the technology, the reader device, can be as commonly done as people use apps on a smartphone," Heller says. "People are very interested in health and health monitoring, but also monitoring their pets and their food and their environment. People want to know what's in things, so our device is very capable of detecting what it is you want to know about yourself and the things around you."

The study confirmed that 2PG detected cell-free, circulating tumor DNA (ctDNA) from blood and urine samples in patients with colorectal or pancreatic cancer whose tumors were previously confirmed via DNA sequencing or biopsied tissue to harbor a known mutation, KRAS G12D.

"This test was performed to demonstrate the technology's capabilities and suitability for monitoring cancer among cancer patients,' Heller said. He believes that the company's technology could have potential application for daily monitoring of serious diseases. "Many diseases would really benefit from daily monitoring," he said. He gave the example of lupus patients who would benefit from daily testing of their antibodies count. "Because if their antibody count goes up, they know they need to take their medication. That's not possible today. People with any condition where taking medication would be prescribed if there are certain biomarkers present … there are a lot of these things," he said.

He foresees that down the road, Two Pore Guys may also be used for consumer testing and is sold as testing kits by pharmacies. But he pointed out that this is the long-term vision for the company, given the many barriers from regulatory hurdles to marketing challenges. "I think the technology, the reader device, can be as commonly done as people use apps on a smartphone," Heller said.

"People are very interested in health and health monitoring, but also monitoring their pets and their food and their environment. People want to know what's in things, so our device is very capable of detecting what it is you want to know about yourself and the things around you," he said.

"I don't see consumers buying this until the menu of tests available is really broad and they feel like this is something they're going to do every day or frequently enough that it's part of their routine," Heller said. "While individual tests may only cost a few dollars, you still need the reader device to use them. It’s similar again to a smartphone: Nobody is going to buy a $500 reader if they’re only going to test themselves for the flu a few times a year. And I say $500, because I feel like that it could be the end price."

The focus for now is to turn more potential partners into Two Pore Guys believers, he said.

"For the most part, we've cleared that concern, because we have so much data and so much demonstrable evidence" he noted. Candidate partners will come to our lab for a deep dive technical discussion, and we’ll just do a side-by-side comparison with existing technologies," he said.

He said the company has a saliva test that tests for HIV antibodies compared to other marketed lateral flow tests. According to Heller, available test on the market take 20 minutes versus 30 seconds for the 2PG test.

"Getting people to believe is not the problem it used to be," he said. "At this point, our biggest challenge is scaling up growth to support such an ambitious and large company."