Axonics Modulation Technologies may be running against medtech giant Medtronic in the field of sacral neuromodulation for overactive bladder, but the smaller player is unfazed. Encouraging preliminary findings from its clinical study, revealed this week at the INS 2017 neuromodulation conference, is giving Axonics' technology the validation it needs. CEO Raymond Cohen is confident that the special features offered by the r-SNM system will galvanize what is already a fast-growing market.

The RELAX-OAB study was initiated in June last year, after the r-SNM system was CE marked, and it has enrolled 51 overactive bladder patients with symptoms of urinary urgency incontinence and urgency. The implantable device works by delivering mild electrical pulses to stimulate the sacral nerves located in the pelvis which control voiding function.

The results, presented on May 30 at the 13th International Neuromodulation Society congress in Edinburgh, Scotland, showed that at one month, 71% of subjects were initial responders to therapy – this is defined as a 50% or greater reduction in incontinence or urgency frequency symptoms, or a reduction to less than eight voids per day in urgent frequency subjects.

At three months, the study found that 91% of the 33 initial responders continued to respond to therapy. Initial responders also reported clinically meaningful improvements in quality of life, underscored by significant improvements from baseline in the ICIQ-OABqol HRQL score of 31.0 points (+/- 4.4, SE, n=23), and over 90% of this group said they were satisfied with the r-SNM system.

In an interview with Medtech Insight, Raymond Cohen, CEO of Axonics, said the results – having come from the company's first human clinical study – marks an important milestone. "It's validation that the product, first and foremost, works as designed; that it's safe and efficacious. We all knew it was going to work but you have to go through that process and it gives confidence to everyone who has been involved in the project and who has worked with us right from the beginning."

The Irvine, California firm does not have to wait long before RELAX-OAB is completed, with all subjects expected to reach the three-month study endpoint in June and the complete study results will be presented at the International Continence Society annual meeting in September in Florence, Italy.

Cohen is confident that the final results will affirm the positive preliminary findings. He confirmed that the data will be made available to the US FDA, as part of Axonics' IDE application to run a pivotal clinical trial to get premarket approval for the r-SNM system to treat OAB. He said that 12 clinical sites in the US, Canada and Europe have already been selected to participate in the study, which is slated to start in the second half of this year – pending the green light from the FDA. For its part, Axonics is "ready to go," said Cohen.

SNM is not a new technology. Medtronic was the first to bring to market its InterStim SNS device, which was CE marked in 1994 and US FDA-approved in 1997 for the treatment of OAB and urinary retention in patients who do not respond to behavioral therapy and conventional drug treatment. Reimbursement codes for this therapy are already in place in all the key markets worldwide and to date, it is estimated around 250,000 patients to date have been implanted with an SNM device.

Adoption of SNM for urological conditions, like with many neuromodulation therapies, is expected to see exponential growth over the as physicians' experience with these technologies deepen and technical advancements continue. Cohen told Medtech Insight that the initial catalyst that sparked growth in SNM was the advent of the tined lead – "putting fish hooks on the lead" – that stops the wire from migrating. "Once that innovation was brought to bear, you saw the market just took off from there," Cohen said. The market will see the same "explosion" with the introduction of Axonics' r-SNM and the benefits that the devices' features – notably its miniature size and rechargeable battery – will bring to patients, he added.

Because Medtronic's Interstim II does not have a rechargeable battery, the implantable pulse generator (IPG) has to be explanted every four years or so. The r-SNM system has been qualified to last at least 15 years. Axonics' IPG is recharged transcutaneously – once every two weeks, for an hour – using an external "puck" that is worn by patient using a belt or adhered temporarily to the skin. Cohen revealed that the firm is working on extending the battery charge so that the IPG only needs to be recharged once a month, making it more convenient for the patient.

Additionally, the r-SNM system's IPG is a third the size of Medtronic’s and one fourth the size of standard IPGs used in neuromodulation systems for other indications. With 85% of the OAB patient population being female and the average age being 57 years old, the size of the IPG, which sits in the patient’s buttock area, is an important factor in this clinical application, believes Cohen. 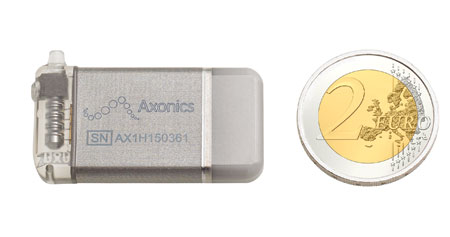 The r-SNM system is a third the size of Medtronic's Interstim and a quarter of the size of standard IPGs.

"So we're now producing a miniaturized device, with a very long life, and I believe this is going to account for an explosion in this business," he said.

As to when the r-SNM system will be pushed out into the market, the CEO said that the plans are for a worldwide launch in 2019, with the hope that the technology will already have US FDA-approval by that time. While the system is CE-marked and the first clinical trial with its promising data is set to complete this year, Cohen has no intention to rush into commercialization. Indeed, the medtech industry veteran believes that too many start-ups and SMEs hurry their products into market far too early, only to find themselves floundering when they are not getting the buy-in from customers (See 'Tip From The Top' below).

Tip From The Top: Timing And Targeting

Raymond Cohen, CEO of Axonics Modulation Technologies, believes in patience pays off when it comes to taking your product to market. In a Q&A session at the INS 2017 meeting in Edinburgh, Scotland, he said that the single biggest mistake he sees many start-ups and young companies make is to rush into commercialization, once they have received approval for their product. What they should be doing instead, is to invest in the time and resource to gather more clinical evidence to build their value proposition and also to gather intelligence on the markets they want to target.

He added though that one of the reasons why companies trip over this major snag is because they feel pressured by investors to start generating revenue and demonstrate there is a market for their product.

Speaking to Medtech Insight, Cohen said that in some cases, if you are introducing a product that is addressing a white space, in other words there is no existing market for your product yet, then you would have no choice but to go and seed the market to show investors that people do want to buy your technology and implement it into their practice.

"But if you have an established therapy that people want to buy, then you can be more judicious in picking a spot, when you want to go to market, where you want to go," he said. In addition to rushing too early into commercialization, the second biggest mistake is that people go "very wide," as opposed to deep."

"What I say is pick one market, one country, one geography, whether it's Benelux or Germany, whatever one you are most comfortable with or well positioned to do, and you go deep and you show your investors that you were able to capture X% of these physicians to buy your product in this particular market. You speak about how you can extrapolate that globally. That to me is the smart play.

When you go too wide, the only thing you prove is that, with a new product and a new market, adoption is difficult and it costs more and takes a lot longer than anybody would ever expect. And the investors then get upset, because what you've done is set certain expectations, but go out in the market and generate $1m, $2m of revenue in a wide effort but wind up spending $10m, $20m doing that. You create your own negative reality."

Cohen added that it's a "huge mistake" especially when people consider going to the US market, as that is "by far the most dangerous market in the world because it is so big and vast."

Instead, Axonics is now investing in taking the time to gather the necessary intelligence they need to understand the dynamics and landscape of each market it wants to access. "What we're doing is we're being very precise, we want to understand exactly what are the rules associated with reimbursement in every single market," said Cohen, adding that even though SNM is a covered service through Europe, each individual country has a quirk. "What you need to do in France to get market access is different from what it is in the Netherlands or Germany or the UK. You need to be very precise, you need to have all the facts. You need to meet with the agencies that decide all these things and understand if there is some sort of small clinical evaluation that is necessary beyond the CE mark or not, for example.

"One should also know who is doing the volume, what clinical centers are doing the volume with the key opinion leaders in these countries and you need to create those relationships with the KOLs," the CEO advised. "You need to do all those things first before you rush out and say 'I'm going to sign a deal or I'm going to hire direct sales people.' That requires experience, time, judgement so when you launch in a country you are not going out blind. You would have already met those KOLs and sat down with them and found out about their practice and introduced your product to them. So when it's time to launch, you're ready to go. People respect that - a little warm up is not a bad thing."

The company raised $14.5m in early May in the first tranche of a series C financing and expects to close the second tranche "in a few weeks" to close the round at around $30m. These funds will support the firm through its clinical studies and some "very specific, directed" early commercialization activities, taking it up to its planned worldwide launch – in the US and the rest of the world – two years from now.

VC Deals Analysis: From Famine To Feast, 2017 Bloats With May Haul